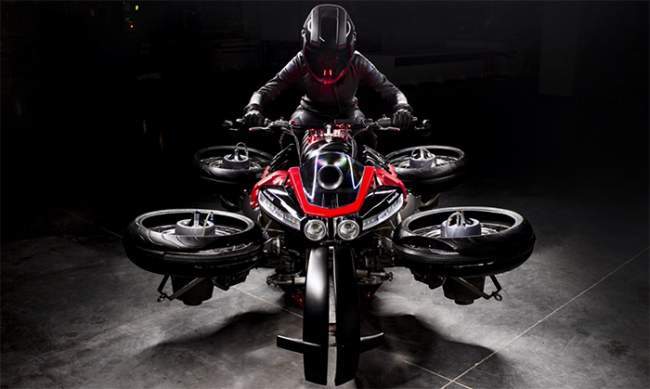 The various sci-fi films of the last few decades have promised us a world where you can drive along in your car and then flip a switch and suddenly be flying. From the flying DeLorean to the Spinners from Blade Runner, where these guys are going they don’t need roads.

Back to the real world of 2019, and it’s unlikely true flying cars will ever happen. Even if the technology side could be solved, it’s not actually a great idea and certainly a terrible one from a safety perspective. The closest we have are products like the Ehang drones. These are basically scaled-up quadcopters that fly themselves. Very cool, but not in the spirit of things.

When it comes to flying motorcycles (or, I guess, any motorcycle-like ground vehicle) things look more promising. The insanely-expensive Hoversurf Scorpion is basically a Star Wars speeder bike, but with four props instead of magic sci-fi powers.

Now we also have a company called Lazareth with their LMV 496. It’s real, but you won’t believe your eyes.

Up, Up and Away

The two most striking things about this prototype is that:

It’s like something straight out of the Stallone Judge Dredd movie. You park it somewhere, press a button and the frame folds out to reveal four high-powered turbines that can keep it aloft for about 10 minutes.

It looks, well, it looks incredibly dangerous. However, it also looks like the coolest things ever and that has to count for something.