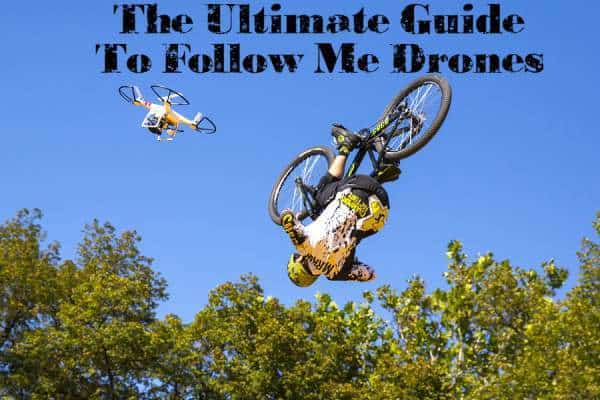 Follow me drones are perfect when you want to get action footage of yourself skiing, cycling, snowboarding, running or even surfing.

Scroll down for more drones with follow me mode.

The Drones from DJI are really setting the standard in the drone world, and they offer the best quality vs price ration right now, making the Phantom 3 possibly the best drone that follows you.

When it comes to specifications and technical characteristics, here are some of the most important ones:

DJI Phantom 3 will deliver an excellent performance when the Follow Me functionality is engaged. The drone uses Global Navigation Satellite System (GLONASS) to do accurate positioning in the Follow Me mode. Because of this system, the drone will remain hovering at the same position in the air and having the camera follow/track a subject.

The technology is available in all three of the DJI Phantom 3 models – standard, advanced and professional. The Standard is the cheapest of the three models, and the main difference between them is the quality of the camera.

Make no mistake, the camera on the DJI Phantom 3 Standard is very good, with crystal clear footage, but professionals in the field and commercial users might want the best available, and then the Advanced and Professional provide a bit more.

DJI Phantom 3 has follow me technology that’s incredibly user-friendly and great for beginners. The controls of the Phantom 3 are also intuitive and easy to master.

Follow Me is just one of the cool functionalities that DJI Phantom 3 features, you also get intelligent modes like Waypoints (a feature that records a certain flight path), Point of Interest (automatically revolving around an object or a subject), Home Lock (all flight controls are relative to the pilot’s position) and Course Lock (all flight controls are locked in relationship to the current course).

The newly released DJI Phantom 4 lives up to the hype. The flight time is extended to 28 minutes, which is almost unheard of for a prosumer drone. It also comes with an advanced form of obstacle avoidance, which can be very useful in certain environments when you are using the follow me mode on the drone. It is also fast, 20 m/s vs 16 m/s of the Phanom 3 Standard and Advanded/Professional.

The biggest difference between Phantom 3 and Phantom 4 is that the newer model comes equipped with an intelligent camera. It can automatically produce seamless tracking shots, it can fly around obstacles and it can react to the specifics of the environment.

The obstacle avoidance can be a huge benefit when using the follow me mode, and this ability sets the Phantom 4 apart from most of the drones on this list.

The Follow Me mode is similar to what DJI Phantom 3 can do.

One of the biggest benefit of the commercial drone Phantom 4 is the increased flight time that enables the camera to track a subject for longer and create more pictures or a longer video clip.

The Solo from 3DR is a drone for GoPro and it is marketed as the worlds first smart drone.

Advertised as “the first drone with a brain,” 3DR Solo is powered by twin computers for a more intelligent performance. It also features incredibly intuitive controls, making it perfect for the newbies looking for an easy to use follow me drone.

The 3DR Solo specs include the following:

The Solo claimed to be the world’s first smart drone. And it undeniable has some very cool features that makes it popular with both commercial users and regular users.

The intelligent computer system allows for angle, distance and perspective changes while the drone is in flight. The result is a more detailed clip that features smooth transitions and movement.

The Mavic Pro is DJI:s first foldable drone, and while being small and easy to carry it still has the exciting tehcnoilogy and key features of  most of the bigger Phantoms.

Portability is what makes the Mavic Pro stand out. But that is not all it offers, it also has some really awesome functions, like follow me mode, dronie by gesture and obstacle avoidance.

The DJI Mavic Pro is an awesome drone that can follow you, with  ground breaking features, and an outstanding flight time. Since it is so easy to bring with you, this is an excellent choice for shooting sports, and extreme sports.

The 3DR IRIS+ is the predecessor to the SOLO, and you can get it a bit cheaper than the SOLO. It comes without a camera but the quadcopter is compatible with GoPro equipment.

IRIS+ features an advanced Follow Me mode and all of the parameters can be set through a tablet. It’s also compatible with any GPS-enabled Android device. Apart from following a subject, the smart technology controls the gimbal to reduce shakiness and produce steady, smooth shots.

The smart technology of the IRIS+ enables the drone to keep the subject being followed in the center of the frame at all times and it is ideal for outdoor sports and extreme adventure enthusiasts.

One small shortcoming to keep in mind is that the drone doesn’t have the capability to go around obstacles. When the Follow Me mode is enabled, the course chosen will have to be relatively free from tall obstacles that the drone could potentially bump into.

This GPS-enabled quadcopter is designed for the needs of beginners in the exciting world of follow me drones. It is also much more affordable than some of the other drones in this list, which makes it a great starting drone for first-time pilots.

The built-in GPS system enables the quadcopter to follow a subject around. The feature can be enabled when both the quadcopter and the transmitter sync with at least six satellites. This is a safety measure that’s needed to keep the quadcopter properly positioned at all times.

– Great for Downhill and Water Sports –

The AirDog has a Follow Terrain feature, and can follow you up and down in altitude. This is great when skiing, snowboarding or any other sports going down a hill.

To my knowledge none of the other drones on this list has the capability of following down in altitude, the DJI Phantom 4 and DJI  Mavic Pro can only follow you up in altitude, which is not all that useful skiing downhill.

If you want a drone that follows you surfing, water-skiing, or enjoying other forms of water sports, this might be your best bet.

Although the AirDog is not officially waterproof, according to reports you can dump it in the water without problems.

The wrist controller is waterproof, so you can control it while you are on the water, surfing, skiing etc.

Another option for water sports would be the Lily drone, which is supposed to be waterproof, but at the time of writing it is not yet shipping, and I dont yet know the price.

AirDog carries a higher price tag than most other drones on this list, but if you will be going downhill or doing lots of water activities it is worth it.

The AirDog was launched after the completion of a successful crowdfunding campaign, and it’s especially created for the needs of extreme sports and outdoor adventure enthusiasts.

AirDog Auto-Follow Drone is foldable and very small, which gives it competitive advantage over the other follow drones.

When it comes to the Follow Me feature, AirDog is capable of doing two things. It can stay behind and capture the action or go in front of the subject.

There’s a wearable device included in the kit that’s used to control the drone.

With the press of a button, you can send AirDog to the starting location. The drone will land and wait for you to pick it up in the end of the adventure.

Ehang Ghost 2.0 is another drone created after a successful fundraising online. It is marketed as being extremely easy to fly.

There is no RC controller, instead you control it with your smartphone.

Originally without a camera, it now includes a 4K camera, but I assume it is still compatible with GoPro Hero.

If you set it to night mode it will use LED-lights so that you can track it better.

When it comes to the Follow Me functionality, it’s once again based on GPS positioning. Keep in mind that Ghost 2.0 doesn’t have an obstacle sensor, which means you should use it in an open area. There’s a G BOX that the subject should wear at all times, allowing for accurate tracking.

The Ghost drone has a really good warranty program. They will repair or replace your drone three times as long as the warranty of one year is running, it will be free of charge, and for any reason. They also cover all the shipping costs.

The Staaker is developed in Norway, and is an exciting new edition to the world of follow drones. Just like the AirDog it uses a tracker that you wear, and that the Staaker will automatically follow.
Here are the specs:

The drone has several different Follow Me modes, and you need to wear the Staaker tracker device.

It will follow you up a hill automatically without any manual input.

Staaker is now shipping and you can order it here.

In the Follow Me Mode, most drones stay at a set altitude, and this altitude will not change regardless of the altitude changes of the subject they follow. So if you are going downhill most drones will stay at the same height and film. If you are going uphill they might crash against the hill.

Some drones are equipped with something called “Terrain Follow”. This feature allows the drone to adjust its altitude while it follows its subject.

The DJI Phantom 4 can follow its target up a hill, and adjust the altitude while moving. However going down a hill the height will probably need stick input.

The AirDog can follow and adjust its altitude going downhill and uphill, making it the perfect choice for actions sports like skiing or snowboarding downhill. This feature can be switched on or off, depending on your needs.

Keep in mind that using the Follow Me mode is usually a bit more challenging than what’s presented in ads.

GPS tracking leaves some margin for error. You should probably get started in a larger open space. Doing a few video clips and checking whether the subject is positioned centrally will give you a better idea about the accuracy and the adjustments that will have to be made.

Regardless of the fact that the drones require no control in the follow me mode, it’s still a good idea to go through the manual and make sure that you stick to the manufacturer’s recommendations.

There could be some specific adjustments to make in the beginning of the flight that will maximize accuracy and the clarity of the shots.

Some of DJIs drones use something called “Active Track” instead of the Follow Me Mode. What is the difference? Active Track follows an object or a person around, while with the Follow Me mode you have the drone track yourself. In the latter mode the drone can keep following you even though there is no visual. With the Active Track the drone will lose its subject if it loses visual.

Follow me drones present you with an awesome way to make action footage of your adventure, whether you are skiing, surfing, kiteboarding, snowboarding, cycling, running or just shooting the action at the skate-park.