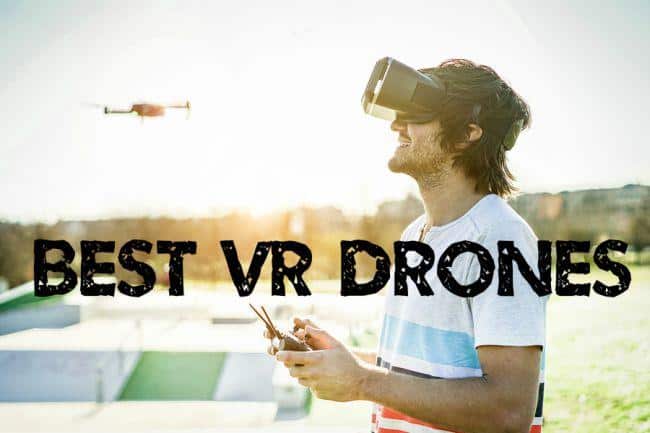 Virtual reality is a white-hot buzzword right now, with immersive head-mounted displays that can take you to a whole other world.

The rise of VR has also had an effect on the world of drones. Specifically the art of FPV or “first-person view” flying. We’ve had simple video goggles for years now, but modern FPV gear is beginning to share significant aspects of VR headset technology. Also, don’t forget that cameras that capture VR content, 360-degree videos, are becoming commonplace.

Even if you aren’t using that sort of camera equipment, gimbals are now also pretty much standard on camera drones and it’s really only in the drone racing world where FPV with fixed cameras is the main style.

Let’s look at the top VR drones for next-generation VR-inspired FPV and the hardware that drives them.

Short on time? We put together this list of the best choices:

The Best Headset for DJI Owners: The DJI Goggles

Actually, before we get to the VR drones themselves I’d like to highlight the latest DJI drone VR goggles for two reasons.

For one thing, they’re compatible with the Mavic Pro and both the Phantom and Inspire product series. Depending on the specific drone these google support head tracking, full 360-degree video and both 720p/60fps and 1080p/30fps streaming depending on the range.

The latency is also incredibly good given how far the video signals have to be transmitted in the round-trip. DJI says the latency is a blistering 110 ms.

The design of the DJI Goggles have also clearly taken inspiration from current VR devices such as the Oculus Rift and Sony Playstation VR. In particular the DJI goggles have a flip-up feature taken straight from the Playstation VR, which let’s you quickly get a bearing of your surroundings.

The DJI Goggles also support a number of 3rd-party transmission sources, but I suggest making sure it works with the gear you want to use before committing to it.

I think without a doubt the combination of the DJI Mavic and the DJI Goggles provides one of the most advanced FPV experiences today.

The Mavic is a compact yet fairly high-end drone made by DJI has 4K video, a 3-axis gimbal and 27 minutes of flight time. At least, that’s the claim. In reality you’ll probably get a little less than that in real world conditions.

The Mavic Pro is not a big drone, which is sort of the point. For one thing, the Mavic Pro folds up for easy transport and it’s an all-in-one design with the camera and gimbal encapsulated within a clear housing.

The coolest aspect is directly controlling the gimbal with just the motion of your head while wearing the VR headset. It’s an almost-instant 1:1 movement of the camera with your head, which means that you can now easily control both the camera and the flight controls at the same time. That’s a big advantage over the traditional approach where one person gets the shot while the other flies.

While it’s not as fast and robust as a DJI Phantom, the Mavic beautifully walks the line between a professional drone and one for mainstream consumers.

I think most people want to try FPV/VR flying to experience flight in a more personal way. It’s a very different experience to watching a screen on your controller and most of us will never get the chance to sit in the cockpit of a real aircraft. At least not more than once or twice.

That doesn’t mean that there isn’t a real advantage to VR flight for those who are interested in making great clips for professional use.

For one thing, when you wear VR goggles you don’t have to worry about your LCD being invisible in bright outdoor light. Yes, shade visors help, but LCD displays just don’t fare well in the outdoors.

Secondly, by using head tracking to control the camera gimbal, you can eliminate the need for a second person to split the camera and piloting duties. So head-tracked VR is about more than just being cool.

This means that in some cases you’ll really want a great photographic platform and that’s where the Phantom 4 Pro from DJI comes into play.

This drone is probably the best photography drone before we get to the big industrial units that can carry SLRs and other custom camera equipment.

With a one inch Sony EXMOR 20 megapixel sensor and up to 30 minutes of flight time it’s hard to think of a better machine for the money.

You have a 7 kilometer range, plenty of intelligent flight features such as obstacle detection and the ability to take 4K footage at 60 FPS.

If you want to be a one-person photography monster, this is the way to go unless you have the sort of cash to stump up for the Inspire or better, but for most people the sweet spot is right here.

You’d be forgiven in thinking that Parrot is no longer around. The company started out right at the beginning of the camera drone revolution with the original AR Drone, but since then has been fairly low-profile as the like of DJI get all the attention.

Make no mistake however, Parrot is still making some great consumer drones and if you want something that will just work out of the box then this Bebop 2 FPV is pretty hard to beat.

In the box you’ll find the Bebop itself, the Parrot Cockpitglasses and the Parrot Sky Controller 2. They’re all made to look like a set and it’s a very futuristic design overall. The Bebop 2 can shoot 1080p videos or 14 megapixel photos.

There’s not gimbal, but you do get 3-axis digital stabilisation which ends up looking pretty good for amateur footage.

The Cockpitglasses don’t contain any video hardware, but need your smartphone and the appropriate app to work. You slip the phone into the case and then the video is beamed there via wireless transmission.

While this is no Mavic Pro, the Bebop 2 has an excellent 25 minute flight time, is compact and doesn’t weigh much at all. It’s pretty much the perfect park flyer for those who want a decent drone, but don’t want to splurge on the FPV hardware.

Thanks to the Skycontroller 2the Bebop can fly out up to about 1.9 kilometers, which is OK but not really a platform for urban exploration.

The Spark is a revolutionary new mini-drone from DJI that we quite liked, but there has been a  lot of misinformation when it comes to the FPV abilities of this little wonder.

One big question has been whether it would work with DJI’s premier VR/FPV Goggles. On the DJI site itself the company has confirmed that compatibility with the DJI Goggles is coming “soon”, but plenty of YouTubers have demonstrated that the latest update is fairly compatible with the Goggles, it’s just not officially sanctioned yet.

The great thing about the Spark is that it’s affordable, but has some pretty good specifications.

One of the way DJI have kept the cost down is by now including a dedicated radio in the standard retail package. In this case you mainly use the automated flight features or take control using the DJI app.

In order to use VR with the DJI Goggles you need to buy the dedicated radio too. This means you can build your drone experience in parts and still have something to fly in the meantime.

Buy the Spark now and enjoy one of the best small drones on the market and when you have more money, but the radio and goggles. Easy terms indeed.

All this VR malarky has made traditional FPV goggles a little unfashionable. Which is why I was surprised that Ehang sells this kit with a pair of goggles that very much look like old-school FPV goggles. Those dual mushroom antenna blisters are a dead giveaway.

Despite looking like old-school FPV gear, these goggles actually have head-tracking built into them  and moving your head will also operate the gimbal, turning the camera along its axes. The video transmission range is a little short however, limited to about half a mile or about 800 meters.

On the other hand, the Ehang shoots 4K video, has self-tightening upside down brushless motors for better stability and can fly for up to 25 minutes, which puts it in the same class as more expensive drones. Overall as a FPV kit this is pretty compelling.

The only thing to keep in mind is that most of the intelligent flight features require a smart device to work and you need to buy either the Android or iOS version of the kit. For some reason Ehang hasn’t made it so you can switch between Apple and everyone else. 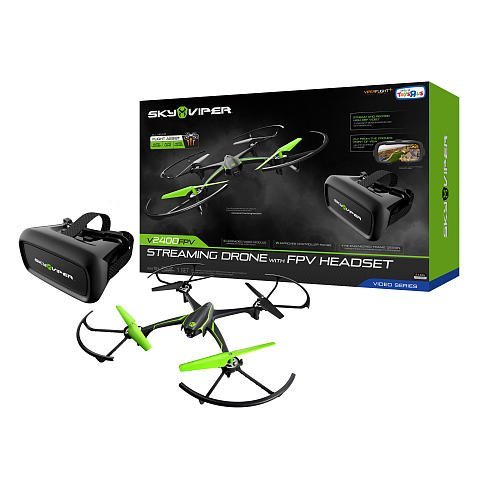 Not too long ago the only way you were going to have any sort of first-person flying experience was to shell out a small mountain of money. Now you can get a basic FPV experience for chump change and the Sky Viper is the perfect example of that.

How does it achieve this feat? By stealing an idea from the mobile VR industry. You’ve certainly seen those VR goggles where you slip your phone into a head-mounted case and then experience a basic VR app. This uses that same principle, but instead of a VR roller coaster or something similar, you’re looking at the live feed from your drone.

So saying that this FPV drone is affordable comes with the caveat that you already need to own a compatible smartphone, otherwise it won’t make any sense.

The Sky Viper has some pretty advanced features for a budget drone. It has 720p streaming, which can also be recorded to an (optional) SD card. Surprisingly there are also some intelligent flight features too, which includes auto launch, hover and landing.

Also, as an added bonus, it seems you can use the headset as a standard mobile VR unit when not flying.

Yeah, I’ve never heard of Goolsky either, but reading over the specifications for this drone you’d be forgiven for expecting it to be higher up the price range.

For your money you get a drone with fast brushless motors, a dedicated 4.3” LCD display with receiver and a pair of goggles to put it in. Alternatively you can mount the display on the included radio, so it’s the best of both worlds.

This drone is not about the camera quality, so don’t expect the 720p onboard unit to blow you away. This is about high speed flight and owners of this drone wax lyrical about its responsiveness and speed, which promises a thrilling FPV experience.

The tradeoff of course is that the batteries will be empty in about 10 minutes if you push it, but on the upside you’ll be blowing past slower drones trying to take yet another aerial photo of some poor sod’s house.

Just be warned that if this is your first brushless performance drone (and it could be!) you may be surprised by its sensitivity and park it nose-first in the ground. Otherwise it seems like a great FPV toy for those who aren’t mainly worried about video or photo quality.

VR Drones In the Hot Seat

Keep in mind to check out our article on FPV Goggles as well. As you can see, the age of the VR drone is finally here for everyone. What used to be a luxury for the professionals is now an experience you can get even in the budget drone segment.

I think these are some of the best examples today, but clearly there’s nowhere to go but up from here!