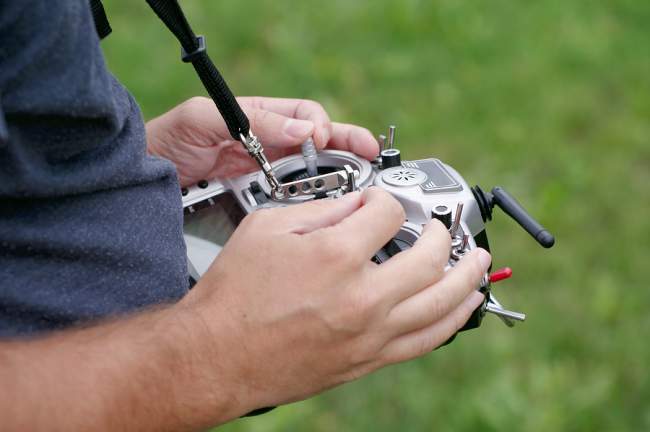 Many people who are fans of drones today, don’t really have a background in RC aircraft as a whole. This makes perfect sense, since drones have made piloting remote aircraft much more accessible compared to the rather steep learning curve of RC helicopters.

So there’s a good chance you’ve never heard the terms collective pitch (CP) and fixed pitch (FP) before. The vast, vast majority of drones use FP technology, but there are CP drones out there and the shift to CP comes with a ton of additional capabilities, along with a few significant cons.

Even if you never, ever come to own or fly a CP drone, it’s an interesting topic and actually pretty easy to understand. So let’s break down the concepts to their basic components and then look at a few real-world CP drones to see what they can do.

Almost all drones and most entry-level or “trainer” RC helicopters use FP rotor blades. The “pitch” of a blade is it’s angle of attack. How sharply it cuts into the air when it rotates, generating thrust. With an FP rotor the pitch doesn’t change. The actual shape of the blade has a single angle of attack. In other words, it produces the same amount of downward thrust at a given rotor speed.

If you want more thrust, you need to speed up the rotor and vice versa to reduce thrust. FP helicopters are much cheaper and mechanically simpler than CP rotors. The only mechanical linkages are those that tilt the rotor disk in different directions for steering. In the case of an FP drone, you don’t even need that. Each of the FP rotors on a typical drone don’t tilt at all, since the multirotor configuration can reproduce all the same  thrust vectoring of one large tilting rotor disc, simply by varying the thrust of each motor independently.

The main advantage of an FP design is that it’s much cheaper than CP models. It’s also easier to repair and replace for the same reason.

When it comes to manual piloting, FP craft are relatively sluggish and therefore easier for beginners to get a handle on. At the same time, they are less capable and, of course, responsive. So what about CP rotor technology?

A CP design is essentially how real, full-size helicopters work. The rotor blades can change their pitch and so the amount of generated thrust is not directly linked to rotor RPM. The rotor spins at a constant speed while the pitch changes angle. If the pitch is neutral, the blades slice through the air without generating any lift.

Which is why CP helicopters can reach a particular rotor head speed and then take off. Whereas FP craft start taking off as soon as the rotor spins quickly enough. As the collective control increases pitch, so does thrust.

A CP design comes with some serious performance advantages. For one thing, it’s far more responsive than an FP aircraft can hope to be. As I mentioned above, when you throttle down an FP craft, you have to wait for the rotors to spin down for a fraction of a second. You also can’t reduce altitude faster than the pull of gravity alone allows. Depending on the specific rotor design, CP aircraft can achieve negative pitch. This means it can thrust  in the opposite direction. So CP rotors can actually push the craft down towards the ground as fast as gravity and the total thrust can manage. CP model aircraft can also fly upside down indefinitely. In fact, with enough skill it’s possible to fly the craft in any direction, from any attitude. Something that’s often marketed as “3D flight”.

As you can probably deduce from the FP pros and cons, CP rotors are more expensive and certainly more fragile. Which doesn’t combine well with the fact that you’re more likely to crash a CP craft until you’ve developed the flight skills needed to avoid that. With CP craft in particular, software flight simulation practice is of paramount importance.

So that covers the basic theory of how these two different approached to rotor design and flight control work, but what does it mean in practice?

Showing is far better than telling in this case, so take a few minutes to watch a professional push the limits of human ability.

Using CP technology the craft is, in the hands of the right pilot, capable of complete domination of the airspace. Now imagine drones with this rotor technology, but under the control of advanced computer software and hardware with far faster reaction time and precision compared to even a top human pilot.

Where are the Collective Pitch Drones?

Right now, CP drones are a very niche product. That doesn’t mean you can’t buy one. The Stingray 500 is one example, and it will set you back about as much as a mid-range, semi-pro camera drone. Have a look at what this baby can do.

The Stingray 500 is interesting in another way. It doesn’t have a motor for each rotor. Instead there is one central motor that provides power to all rotors using a single belt. Remember, with CP the head speed and thrust are independent. It’s only the pitch of each rotor that changes.

That’s not the only way to get collective pitch or its equivalent on a quadcopter. You can simulate it by reversing the direction of the brushless motors using FP rotors. There have been other “3D” drones that have FP rotors that are symmetrical and generate the same amount of thrust in either direction. Of course, this is a crude, inefficient approximation of what a proper CP mechanism does, but it will give much of that capability, with the same costs and benefits as a regular FP drone.

So Why Should You Care?

Clearly, right now, CP technology in drones is something top-tier pilots care about. However, there are plenty of reasons to want this sort of flight capability in automated drones. Speed, grace and maneuvers that seem to defy the laws of physics is never unwelcome. It’s just that right now there probably isn’t a system cheap enough for commercial use either in terms of the hardware, sensors or software that could do CP technology justice.

I’m hoping that will change. It’s doubtful that manually-controlled CP drones will ever be popular thanks to the learning curve. However, who wouldn’t want a camera drone that can do what these machines do!