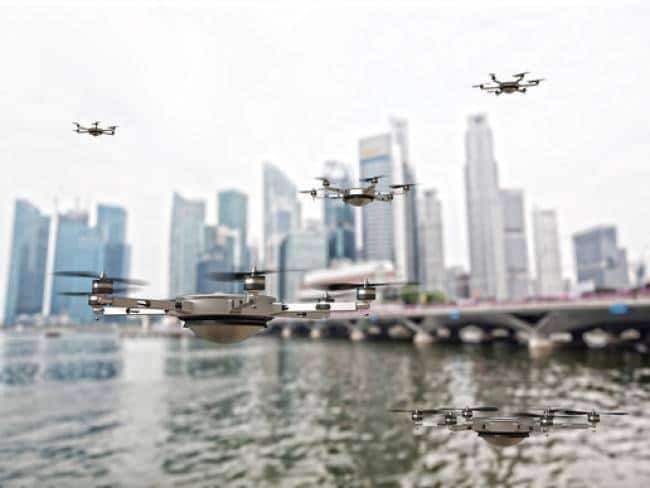 Drone language may be confusing for beginners. This is a small glossary put together to help you understand the more commonly used terms in the drone world.

Auto leveling: this flight mode allows the drone or quadcopter to perform even flight. This is usually an automatic feature that gets engaged through the push of a button.

DJI: DJI is a Chinese company that produces drones and drone equipment. They are one of the leaders in the industry.

DJI Phantom: the DJI Phantom 1,2 and 3 is a series of drones by DJI that have been very successful in both the consumer market and for professional use.

Drone: a UAV that’s usually piloted from the ground. It could carry a camera or it can simply be used for fun.

Dronie: Taking a selfie from a drone flying in the air. Often controlled via gesture based technology. See our top list of drones that can take selfies here.

Electromagnetic interference (EMI): any disturbance that could potentially affect the control of the UAV is known as EMI. EMI of any kind can make it impossible for a human to pilot the drone from the ground. All kinds of electromagnetic radiation could interfere with the piloting of UAVs.

FC: the Flight Controller is used to control the UAV.

First person view (FPV): a technology that allows the person controlling the drone to observe the flight, as if they’re in the aircraft. FPV is possible because the camera footage from the drone or the quadcopter is observed in real time. Most often, FPV footage is viewed on a tablet or a smartphone. Some drone models could have specialized goggles for the purpose.

Fly away and fly away protection: fly away refers to UAV flight that’s not controlled by the pilot. Fly aways are often caused by EMIs. Some UAVs come with fly away protection systems. In case of loss of control, the drone’s GPS location system can make it return safely to the start position.

Gimbal: a gadget used to stabilize the camera so that the video remains stable when flying. Very useful when shooting video, and a must if you want to get really good video.

Global positioning system (GPS): this is a navigation system and most UAVs come equipped with it. GPS makes it easy to always have an accurate idea of the drone’s location. The positioning system also allows for the return home functionality.

GoPro: The company GoPro manufactures the GoPro Hero which is an action camera commonly used in action sports, cycling, on helmets, while surfing and on drones.

GoPro drone: a term commonly used for drones being able to carry a GoPro Hero camera. Can also mean a drone manufactured by the company GoPro.

GoPro mount: Used to attach a GoPro camera to a drone.

Gyroscope: this device consists of either wheels or discs, enabling it to spin around its axis. An UAV that has a camera with a gyroscope will typically be capable of shooting steady footage.

Line of sight: also known as LOS, it refers to being capable of seeing the UAV in the air. For safe use of a drone or a quadcopter, it should always be within the ground controller’s line of sight.

Mount: used to be able to attach a camera to a drone.

No fly zone: a term that refers to areas that have governmental restrictions disabling the flight of UAVs above the region. Here is an updated map of no fly zones in the US.

Over the horizon: a situation in which the UAV is outside the controller’s line of sight.

Payload: this measurement refers to the amount of additional weight that UAVs can carry. The payload usually refers to the weight of the camera because that’s the additional equipment most often installed.

Quadcopter: A quadcopter has four horizontal propellers. Because of this characteristic, a quadcopter is typically capable of more stable flight than a remote control helicopter.

Ready to fly (RTF): this term refers to drones and quadcopters that come completely assembled. Such devices are literally ready for use once they’re taken out of the box.

Starter Drone: drone that is suitable for beginners.

UAV: an acronym that stands for unmanned aerial vehicle. This is a device that’s capable of movement without having a pilot on board.

Yaw: looking down on a drone, the term yaw refers to movement of the drone counterclockwise or clockwise.

2.4 Ghz: is the most commonly used radio frequency rate for drone controllers.