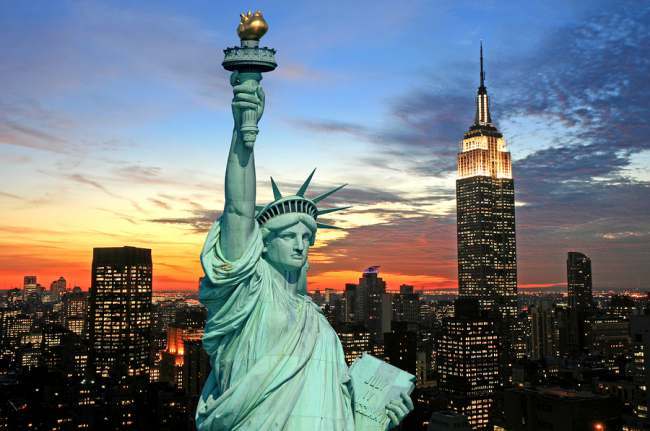 New York, New York. The city so nice they named it twice. Of course you might imagine that such a densely populated city is pretty unfriendly to drones.

Except, when we talk about New York State drone laws, we’re referring to the entire state of New York. That’s an almost 55 000 square mile area and is the 27th largest state in the USA.

The Role of Federal Law

Federal laws and regulations take precedence over state and local laws. This means that everyone in the USA must at least adhere to the FAA’s regulations on drone registration and pilot licensing. I’m not going to reiterate all of the FAA’s new rules here since we and many others have written about them so much already. Check out the official FAA site for the straight dope and don’t forget that state and federal laws have to be taken together if you want to stay on the right side of the law.

There are nine major cities in New York State and just about all of them have made it illegal to fly drones in them. This is understandable since nowhere in the USA are drone pilots allowed to fly over people. That’s hard to avoid in densely populated cities. Obviously commercial drone applications might get individual permits or licenses, but for Joe Average it’s a no-go.

Luckily  many of these cities (including New York City) have designated parks and model airfields where it’s perfectly legal to take to the skies . If you have any doubt whether a given park of other open area is legal for your drone then pick up the phone and give the custodians of the property a call to make sure it’s OK.

In New York City, for example, you can fly in:

All of Manhattan is off-limits, so get ready for a road trip if you want to get airborne.

There are two venues specifically listed in state law where you can’t fly your drone when an event is on. The Town of Orchard Park and the Ralph Wilson Stadium Complex have strict prohibitions on drone flight that are close to events temporally and geographically. There are of course exceptions where written permission is obtained, but if you’re not there to film in some official capacity and don’t have the right paperwork be ready for hefty fines.

There’s some good news though. Drones are exempt from sales tax in New York State. Given how expensive drones and their accessories can be it’s a small but important relief on the cost of drone ownership.

The Lack of Drone Laws in New York State

Apart from broad bans on drone flight in NYC, Syracuse and Orchard Park there aren’t any specific prohibitions on drone use in New York State, which means that the general Federal regulations are the primary restrictions on what you can do.

That being said, there are plenty of non-specific laws that still apply to drone use, such as reckless endangerment and trespass laws.

While New York State might have been a little slow off the mark with drone-specific legislation, there are quite a few proposed laws that might come into effect any day now.

An important one is a law describing what the liabilities are of drone owners, operators and makers respectively. Many states have already put laws on the books to this effect, but the NY version of this legislation is still making its way through the system.

Basically it will say what sort of damages an injured party can claim from each of the three liable entities depending on circumstances.

There’s also a law on the way that will specifically explain what law enforcement agencies and government departments in NY may and may not do with drone technology. Hopefully this will provide regulation that protects the rights of normal citizens in the interest of justice.

NY is also looking at banning the use of drones as a way to make hunting easier. Taking of wildlife in general with the help of a drone would be illegal if this law passes

Just as Florida has already done, NY also want to ban the weaponization of drones. So if you wanted to attach a pistol, knife or flamethrower to your new drone you might want to rethink it. In fact, rethink it hard whether the law passes or not!

Because drones have been used to bring weapons, drugs and other really illegal stuff into prison yard, there will also probably be a law prohibiting anyone from flying drones near correctional facilities.

The severe lack of surveillance and privacy laws is also being addressed thanks to several laws that will define what counts as illegal surveillance and how privacy works when it comes to private drones.

Flying Around the Big Apple

It’s a bit of a pity that New York residents can’t fly their camera drones around some of the nicest urban scenery to be found anywhere on Earth, but there were always going to be some places wings need to be clipped. At least there’s a lot else to do. Like getting  mugged in the subway while eating a sandwich you just bought at the subway.

Disclaimer: We’re not a legal advice blog and our legal team consists of a dog that got inside a courthouse once. So this article should not be taken as any sort of final authority. It’s always up to you to make sure you comply with local, state and federal laws. This article is provided for informational purposes only.