Commercial agriculture involves a vast range of cumbersome but important processes. The good news is some of those can be simplified through the use of technology (or already have been). Drones provide brand new opportunities to make agricultural processes easier and a lot more efficient. Needless to safe, the use of such technology is also a lot safer than the manual labor of farm workers.

The use of drones for agriculture depends on a number of important factors. The first and probably most crucial one to take a look at is the regulatory framework.

This post is old and contains information that is not updated yet. For accurate info please read more here: Commercial Drone License Rules.

One thing to keep in mind is that there’s no need to obtain FAA approval for flying model aircraft. The interesting thing to point out, however, is that the definition of model aircraft is the subject of disputes. As you can see, there isn’t a lot of clarity when it comes to the legal use of farm drones.

Regardless of these challenges, many farmers are already using drones to survey the health of their crops. They certainly are breaking the regulations but FAA hasn’t been too adamant on doing enforcement in private properties.

If you’re about to start using a drone for agricultural improvements, you may want to check the regulations in your country first. Such activities have been legalized in several countries. You should also pay attention to the types of drones that can be used for the purpose of farm surveillance or crop dusting.

A good agriculture drone should be capable of doing several things.

For a start, an agriculture drone can be used for the purpose of surveying crops and collecting data. Thus, a drone that has a high quality camera will be required. This type of UAV enables real-time monitoring. It’s a good idea to look for a drone that has a stabilization system. It will reduce footage shakiness and contribute to a much better surveillance process.

The next choice to make focuses on whether a fixed wing or a multi-rotor drone should be purchased. Most farmers prefer fixed wing drones because of several important benefits these have.

Multi-rotor platforms have batteries that last a shorter period of time. In comparison, fixed wing drones can spend much more time in the air. This characteristic turns them in great gadgets for the owners of large farms. Fixed-wing drones are best-suited for the surveillance of large open spaces. In addition, they can carry more payload. This means that such drones are equipped with a bigger number of sensors than the multi-rotor ones.

Also, there are several additional features and upgrades to look into. Some drone models can come with an optional ground control station, RC controller and additional sensors for even better surveillance.

A few other things to look for in a good farm drone include:

Uses of Drones in Agriculture

Drones can be used to accomplish a lot on a farm. Imaging and monitoring of crop health is just the beginning. The applications of UAVs are much more diversified. Here are some of the possible uses:

For a start, figure out what your main priorities are. Would you be interested in aerial surveillance and mapping? Would you need a near-infrared or a thermal sensor? Or maybe the more efficient use of resources is your primary concern?

The first and most important thing to do is get used to the controls. This is particularly important for bigger commercial drones that will be used over large industrial farms. Enrolling in a course to learn the basics may also be a good idea, if you plan to use a commercial drone for farming or start a drone-based business and offer such services.

Once you master the basic controls, experiment with the camera and the sensors. Imaging is one of the biggest agricultural drone essentials. The quality of the footage and maps created has to be superior in order to deliver sufficient volumes of information.

To make the best use of an agricultural drone, you may want to keep the following additional tips in mind: 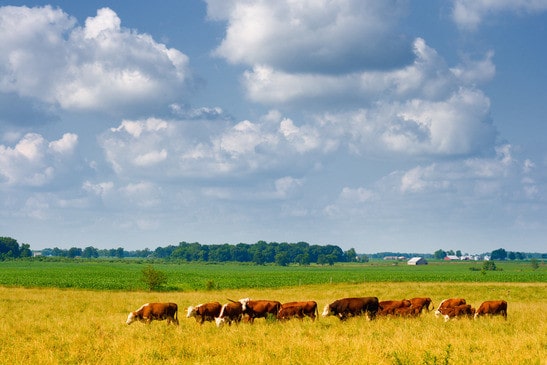 How Much does it Cost?

One final question remains unanswered – how much money should you be prepared to spend on the purchase of an agricultural drone?

For a start, the initial investment will pay itself off in a relatively short period of time. The drone saves manual labor, speeds up processes and boosts crop health. Needless to say, improving crop health can increase revenue almost immediately.

There are big differences in the prices of commercial drones. These depend primarily on the characteristics and the added features of the UAV. The prices of ready-to-fly agricultural drones usually start at about 1,000 dollars and they can reach up to 25,000 dollars.

It’s certainly a good idea to start with a simpler piece, test its features and determine whether it produces the desired benefits for your business. In a bit of time, you may decide on the purchase of a more expensive drone that can be used to complete a bigger number of processes on a farm.

3 of the Best Priced Drones for Agriculture are:

1. The DJI Phantom 3 Standard. It has a flight time of around 23 minutes, and captures very good 12 MP Photos and 2.7k video.

It is cheap, and a good starter drone, and can be used for crop monitoring, 3D-mapping + NDVI (with the help of an app) and photography.

2. The Phantom 4 Pro, which can do all that the Standard can do but has a flight time of around 30 minutes, and a 7 km control range.

It also has obstacle avoidance and a superior 20 MP sensor, shooting video in 4K. It can be used for crop monitoring, 3D-mapping +  NDVI (with the help of an app), and photography.

3. The DJI Inspire 1, an amazing tool which can be used for Thermal Imaging if you combine it with a DJI Zenmuse XT thermal imaging camera. Like the Phantoms it can be used for 3D-mapping +  NDVI  (with the help of an app), crop monitoring and photography. It can shoot 4k video in 360⁰.

Some other higher priced but good drones for agriculture 2017 include AgDrone by HoneyComb (approximately 10,000 dollars),  and Lockheed Martin Indago (approximately 25,000 dollars). These products are specialized agricultural drones. Some less expensive commercial drones can also be used in farms. The investment will be much smaller but a few accessories like necessary sensors will have to be purchased.

Also see our recently published list of the best commercial drones 2017 for more drones you can use on your farm. Some of which can be used with a GoPro camera.