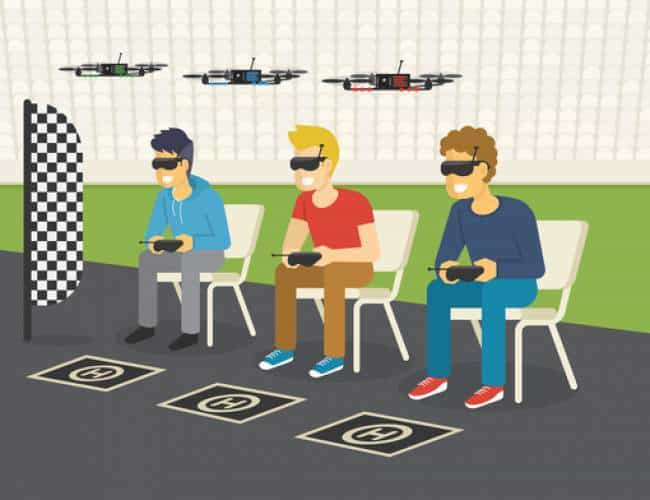 If you’ve made your first steps in the world of drones, you’re probably looking for opportunities to make the activity a bit more exciting… maybe even a bit more competitive. If you’d like to test your skills and see whether you’re better than other drone pilots, you should definitely try drone racing.

It sounds really fun but what exactly is it and how can you get started?

Drone racing is a competitive sport. As the name indicates, it involves drone piloting. Pilots have to fly their drones through courses at a high speed and work towards “crossing” the finish line first.

Obviously, the first step you’ll have to make in order to become a drone racer is to purchase a drone and learn how to fly it. Depending on the competition and its specifics, some courses could be very complex and featuring a range of obstacles. To participate and keep your precious equipment safe, you have to be 100 percent confident in your piloting skills.

Some of the biggest competitions in this field are known as FPV races. FPV stands for first person video racing. In this instance, the pilots need to have a drone with camera. The competitors wear head-mounted displays that give them a live camera stream that’s captured by the camera drone. It’s easy to understand how such competitions can be a lot more challenging than viewing the drone from the ground and piloting it this way.

The History of Drone Racing

The first FPV drone races started as amateur competitions in Australia and New Zealand. These competitions were called Rotorcross.

In late 2014, hobby enthusiasts started working on their own FPV drone racing equipment. The prominence of this discipline grew quickly. Today, FPV drone racing is gaining so much attention that it’s expected to become a recognized projected virtual reality (PVR) sport. This will happen when drones and quadcopters start carrying 360-degree cameras that give the pilot all of the necessary information about the flight.

Because of the sport’s popularity, FPV racing leagues have already been formed. One of the most prominent formations in the niche is the Drone Racing League.

Drone Racing League (DRL) defines itself as a sports and media company. In 2016, the organization is expected to be the one hosting a global race series that will end with the World Championship in the niche of FPV racing.

Some of the races that DRL is responsible for include:

DRL provides pilots interested in the competition with various resources that can be used to acquire better skills. The official DRL website (TheDroneRacingLeague.com) features a simulator that gives drone pilots a better idea about what FPV is. There are also numerous videos that show just what the pilots participating in the competitions are seeing.

The Drone Racing League has come up with its system for awarding points and assessing the performance of pilots participating in the races.

Because of the complexity and intensity of such competitions, FPV races attract some of the world’s top pilots. The current leader is Zoomas – a pilot from the US who started flying drones in 2012. M0ke follows. He calls himself a freestyle pilot who has completed both the Preseason Gates of Hell and the Level 1 competition. More information about the pilots and their biographies is available on the DRL website.

Competitions You can Join

Though entering a Drone Racing League competition is incredibly difficult and you have to prove your skills first, there are numerous smaller events open to amateurs.

If you’d like to do an FPV drone race, download a simulator first to get a better idea about what it feels like. FPV racers need to have excellent reaction time and the capability to fly their camera drone at a very high speed.

You’ll need the right equipment type. Most pro racers customize their quadcopters and make improvements to increase both speed and agility. Numerous online guides provide a lot of information about the types being used and the additional parts that can be used to improve the equipment even further.

You can get a more detailed review here listing the 6 top racing drones in 2017.

People who are serious about being drone racers should go through the following steps: take a class, join a team, enter a competition. There are numerous drone user groups that hold regular events, accept new members and form teams for participation in more serious competitions. It can be a lengthy process but it will be truly rewarding. In addition to the adrenaline rush you’ll experience, you’ll also get to meet similar-minded individuals that share the same passion.

Also check out this guide to get an awesome pair of FPV goggles to go with your racing drone.

Many consider drone racing to be the sport of the future. It’s definitely going to grow bigger and bigger. Chances are that additional disciplines will be created, giving drone enthusiasts diversified opportunities to test their skills. The time is certainly right to give drone races a try. There are dozens of opportunities, whether you’re a pro or an enthusiastic amateur who’s just getting started with quadcopters.