Drone technology is evolving surprisingly fast, and drones can now fly much longer distances than before.

We reviewed the best of the furthest flying drones.

Top of the list is the DJI Phantom 4, with a range of up to 5 km, and an outstanding flight time of around 28 minutes. It also has a 4k camera, and obstacle detection.

The Hexacopter Typhoon H by Yuneec also impresses with a 1.6 km range and a flight time of around 25 minutes. It carries a 4k camera, and can detect and navigate around obstacles. 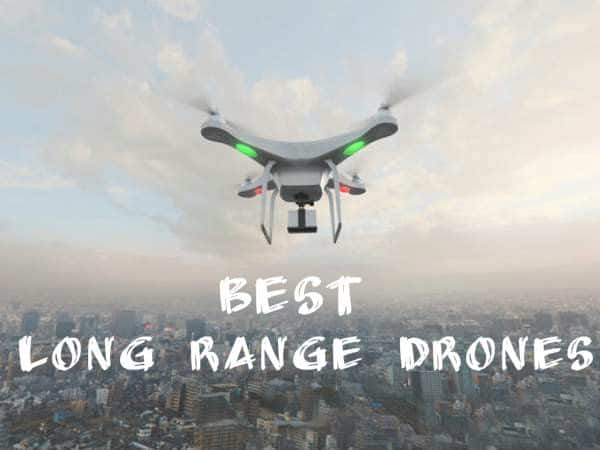 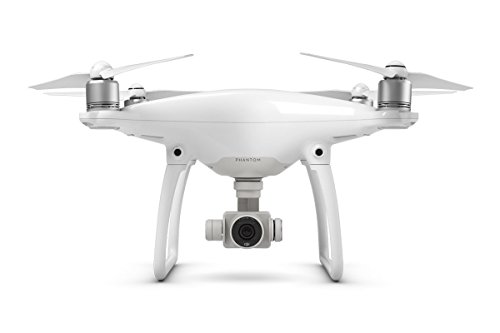 DJI Phantom 4 is a long range FPV drone that was unveiled on 1st March  2016.

The flight time of 28 minutes is very impressive, and almost unheard of in prosumer drones.

The range is equally impressive with a control range of up to 5 km.

It also has “Follow me mode” and an advanced obstacle detection.

It’s more powerful and efficient than its previous predecessor, the DJI 3 Phantom, and has set the bar very high for affordable consumer drones.

It has frontal obstacle sensors that have coupled with an advanced computer vision processing to enable the drone spot and avoid obstacles on its flight path.

It’s capable of both Time lapse and High Dynamic Range imaging (HDR). The image formats supported include JPEG and DNG.

DJI GO is a mobile application that enables you to control the DJI 4 Phantom with your smart device.

It is compatible with iOS 8.0 and Android 4.1.2 or later versions of the two.

It has a Live View Working Frequency of 2.4 GHZ ISM.

The controller operating frequency varies from 2.400 GHz to 2.483GHz.

Its maximum transmission distance ranges from 3.5 Km (for CE compliant) and 5 Km (for FCC compliant).

The Inspire was created by DJI to be an all in one flying platform for photos and video. It has retractable carbon arms that can move out of the cameras view and give a  360⁰ unobstructed view perfect for film making.

Focused more on film makers than normal consumers, the DJI has an outstanding range of up to 5 km and a flight time of around 18 minutes.

The drone weighs 2935 g. It has a maximum cruising speed of 22 m/s and a flight time of approximately 18 minutes.

It connects to both GPS and GLONASS hence it connects to satellites faster and positions itself very accurately.

DJI GO is a mobile application that enables you to fly the DJI Inspire 1. It also enables you to create and share content. It is compatible with iOS 8.0 and Android 4.1.2 or later versions of the two.

Its maximum transmission distance ranges from 3.5 Km (for CE compliant) and 5 Km (for FCC compliant).

It can hold both tablets and phones. It has two video ports for USB and mini-HDMI output. 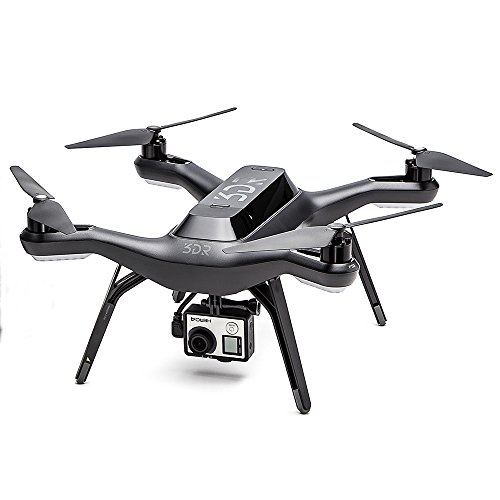 Claimed to be the worlds first smart drone, 3DR Solo drone has more than 35 sensors and 20 microprocessors fixed onto it to ensure easy and smooth flying experience.

It has some really cool aerial photography and videography modes such as cable cam, orbit and follow me. This is a great long range personal drone designed for use with GoPro.

It has a range of around 1 km, but you can buy a range booster that will significantly the range of this long range drone. The flight time is approximately 20 minutes.

The maximum ascending speed is 10 m/s when in stabilized mode and 5m/s while in fly mode.

It has a flight of 20 minutes without payload and 15 minutes with the payload. The maximum speed is 55 mph.

It can achieve a maximum altitude of 400 ft. When fitted with both the gimbal and camera, it weighs about 1.8 kg.

3DR Solo app for both Android and iOS enable you to receive an HD live stream from the Solo.

It does not have an inbuilt camera but is compatible with GoPro Hero 3+Black and Hero 4.  It has several smart shots making the taking images and videos easy and fun. They include the cablecam, orbit, selfie and follow me modes.

The gimbal is bought separately.  It has HDMI video output.

The controller’s operating frequency is 2.4 GHz. Its maximum transmission distance is around 1 km. It can hold both tablets and phones.

You can get a booster kit to extend the range of the 3DR SOLO.

The drone is powered by a 5200 mAh, Lithium polymer. It takes 1.5 hours to charge the battery to full. 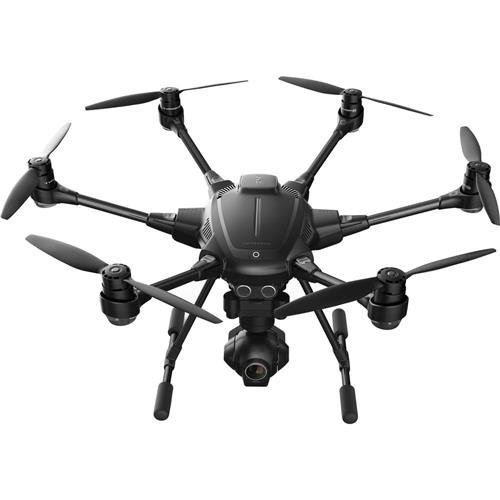 The Yuneec Typhoon H is a long range hexacopter, unlike the other drones on this list. That makes it more stable when taking pictures, and it can keep going if a propeller fails.

Yuneec also has a great reputation and a long history of manufacturing hobby drones. They are know for their excellent customer service.

The Typhoon H comes with a 4K UHD camera and has a flight time of up to 25 minutes and a very good range of 1.6 km.

Its 520x457x310mm in dimension and 1695g in weight. Its maximum altitude range is 400ft. Its maximum ascending and descending speed is 5m/s and 3m/s respectively.

The Yuneec Typhoon H offers up to 25 minutes of flight time.

The drone comes with a 3-axis gimbal allowing for a 360-degree view. The gimbal offers manual camera setting while the drone is airborne.

The drone is accessed and controlled through an ST16 Ground station.

The controller has a transmission range of 1.6 km. It has an inbuilt display of 7” and does not need a smartphone to display.

The data displays all the necessary flight system telemetry data. Its operating frequency is 5.8 GHz.

The resolution of the live stream on the screen is HD 720p. 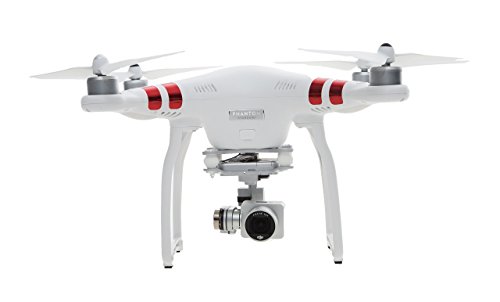 DJI Phantom 3 Standard is part of the larger DJI Phantom 3 family which includes the Phantom 3 Professional and Advanced. The Phantom 3 is a cheap long range drone, and it is of really good quality and provides great value.

It has a decent range of up to 1 km and a flight time of around 25 minutes. The range can be extended with the BlueProton DJI Phantom 3 Standard WiFi Signal Range Extender, and it is surprisingly cheap.

The drone weighs 1216 g. It has a maximum cruising speed of 16m/s and a flight time of approximately 25 minutes.

The camera’s FOV is 94°. The Phantom 3 Standard shoots video in 2.7K , and the photos are 12MP.  It’s capable of both a single shot and burst shooting of 3, 5 and 7 frames.  It’s also capable of Time-lapse image capture.

DJI GO is a mobile application that enables you to fly the DJI Phantom 3 Standard. It also enables you to create and share content. It is compatible with iOS 8.0 and Android 4.1.2 or later versions of the two. It has a Live View Working Frequency of 2.4 GHZ ISM.

The controller operating frequency varies from 5.735 GHz to 5.825 GHz.

Its maximum transmission distance ranges from 0.5 Km (for CE compliant) and 1Km (for FCC compliant).

Long range drones travel far from the pilot. This makes them more ideal for several uses which include;

Long range drones have lately gained adoption among researchers. Drones offer an overall overview which is very important in research. The larger the area of coverage, the better. More importantly, long range drones can be sent to areas that are hard to reach making it possible to gather information about these places.

Easy to deploy long-range drones enables GIS specialists to capture aerial images. These images are later transformed into 2D maps or 3D models. This is made possible without the need for helicopters or piloting skills.  The longer the drone can travel, the better.

Drones with a long range are already being used to monitor crops in farms. They are deployed to take images of the farm. The images are then later analyzed to unearth any underlying problems for instance irrigation problems or pest. The areas identified to be affected, are then attended to.

Monitoring crowds or neighborhoods is quite difficult from the ground. Using drones with long range, they can be viewed from above making it easy to monitor. They also offer a means of risk-free and efficient surveillance owing to their low noise level making them discrete. 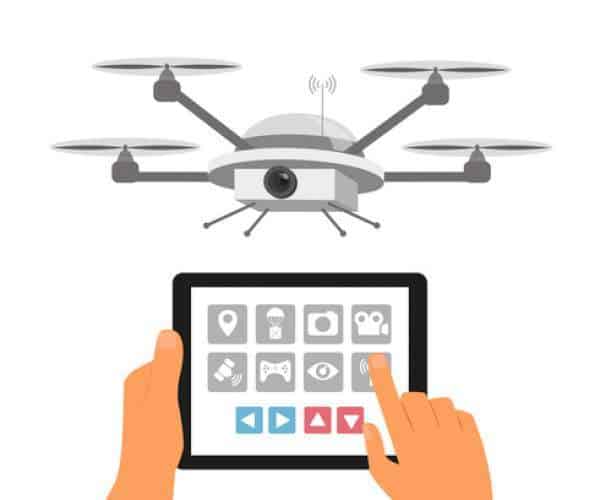 What to Consider when Buying a Long Range Drone

You should not only be concerned about the range, you also have to consider things like flight time, safety functions and the quality of the camera. Some companies also stand out in terms of after sales support. You might also want to consider drone insurance especially is you are using the drone commercially.

Some important specs you might want to keep in mind are:

Some UAV’s are harder to fly than others. If you a beginner then you might need to buy a UAV that is easy to control and probably one that is fairly cheap, so that if you crash it while learning, the loss is minimum. You can buy more advanced and expensive ones as your skill level improves.

The Phantom 3 Standard and 3DR SOLO offers very good value if you are looking to fly fairly long distances without investing too much money.

If you want to fly long distances, you can pretty much rule out the budget quads. You need quality, and that will usually start at around $500.

Regulations Regarding Flying of a Long Range Drone

The number of drones in the hands of individuals and organization is growing day by day. This has prompted the Federal Aviation Administration to come up with rules and regulations to govern the use of UAVs to ensure that their use does not pose any dangers. FAA recently released a circular on UAVs. Some of the things covered in the circular include;

As a beginner, you need to go through the circular to understand these rules to avoid getting in trouble with the authorities. Read more at FAA.gov.