The original DJI Inspire is a tough act to follow.

This was the drone that brought commercial flying 4K footage to the market for anyone who could justify the hefty price tag.

You got a lot for your money though. The original DJI is renowned for it’s amazing build-quality and stability.

This was a good thing, because professional-level drone ownership is a risky business. Even when you do everything right you still have to face up to battery failures, pilot error and who knows what else.

It’s been a few years now since the first Inspire graced our skies and DJI has had ample time to learn lessons that could improve its successor.

The DJI Inspire 2 is the the sequel to the original hit, but is it Godfather 2 or 2Fast2Furious?

More than a Pretty Face

If you’re already familiar with the first DJI Inspire there isn’t too much that’s surprising here. That’s not a bad thing by any means.

There’s a good argument to be made that the original Inspire was the best-looking drone in the company’s lineup. The Inspire 2 does nothing to spoil those great Sci-Fi lines. If you didn’t like the look of the first one, well maybe you have to learn to be less shallow and look more than just skin deep.

Which, incidentally, is what we’ll do next.

The Inspire 2 continues DJI’s philosophy of over-engineering. The shell is a magnesium aluminum composite and the support arms for the motors and props are a tough carbon-fibre weave.

This promises to make the Inspire 2 exceptionally crash resistant, with the core frame and solid-state components unlikely to be trashed in a fall.

Which is good, because this is one fast mover. According to the official specifications the Inspire 2 will go from 0 to 50 mph in five seconds. While it’s hard to test if this is true or not there’s no doubt that the Inspire 2 looks plenty fast in flight. This does not make it the fastest drone in the DJI range, but it’s pretty close.

One quite big number is the price. The MSRP of about $3000 definitely stings, but given that the Inspire 1 launched at around the same price it means this is actually cheaper when you take inflation into account. 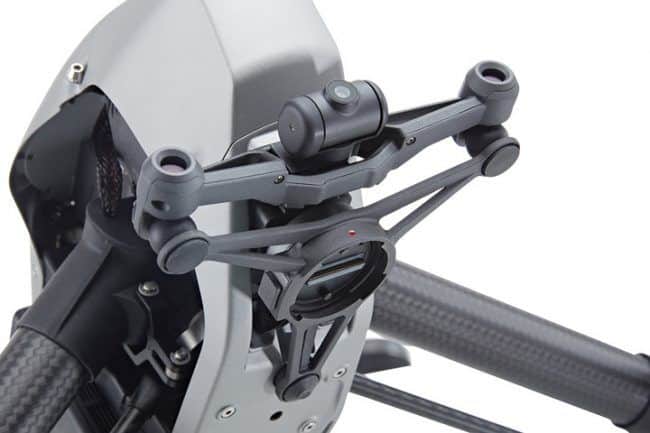 Fully-equipped the Inspire 2 has two cameras onboard. There’s the expected main camera for footage. At this time only two cameras are supported by the Inspire 2. You have the choice of either the Zenmuse X4S or the X5S.

There are a long list of specifications for both cameras, but the key difference comes from the resolution.

There are other important differences, but it’s would be better to compare the spec sheets directly. The Inspire 2’s image processor can handle 5.2K at 30 frames per second in RAW format. If you want 60fps you’re limited to 4K one way or another.

The X5S is a versatile product with more lens options and many features that are worth looking up if you really care about filming at the high-end.

The other camera is the brand-new FPV front-facing camera. This means that you or your copilot can always see where you’re flying, even when the main camera is pointing elsewhere.

Shooting an entire film with the DJI Inspire 2 and the X5S camera.

The Inspire 2 can provide about 25 minutes of flight time, depending on conditions and how hard you push it. That’s a good figure and should suffice for most professional use cases, but that’s not the best things about the battery system.

The Inspire uses a redundant dual-battery system. That’s obviously partly responsible for the strong flight times, but it also layers in yet another form of safety and failure tolerance. Should one of the batteries fail (as LiPos tend to do occasionally) the Inspire 2 can still land safely with whatever juice is left in the working power cells.

While we’re on the subject of power, it’s impressive that the 15-inch props each put out 2 kilograms of thrust. Keeping the Inspire 2 aloft for 25 minutes needs a hefty 98Wh of battery power.

As Far as the Eye Can See – Inspire 2 Range

That FPV camera means that you don’t have to worry about line of sight in order to effectively pilot your expensive professional camera drone, but depending on the law in your country or region you may be required to keep line of sight.

If you really do want to push it, DJI says the maximum control range for the Inspire 2 is 7 kilometers or about 4.3 miles.

It’s pretty unlikely that all but the most specialist of use cases would need a range farther than that.

Should you wander out of range you can still rely on the smart return feature to get it back in range. There’s also a whole new object avoidance system. There are sensors that can detect objects around the drone and primary camera can be used for object detection too. 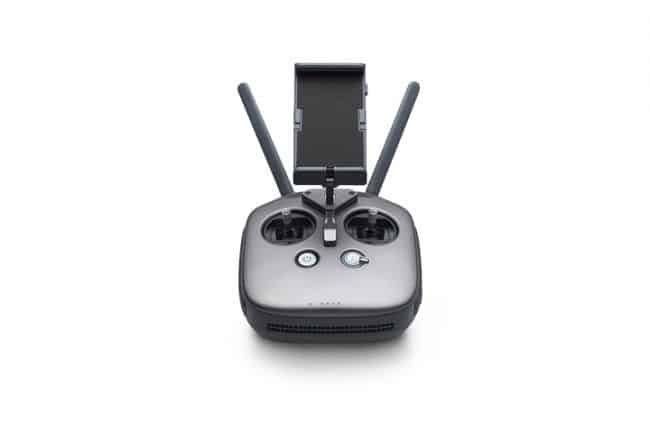 The radio controller makes use of Lightbridge technology and can freely switch between 2.4 and 5.8Ghz.

It’s possible to have two controls in a master-slave configuration so you can have a dual-user configuration with another pilot. For complex professional shots this is basically an essential feature, since one person has to completely concentrate on the flight path while the other gets the shot.

The video signal is output over either USB or HDMI and there’s a device clamp for whatever you decide to hook up for video.

Inspire 2 App – Smarter in Every Way

The software that needs to go on your phone or tablet is the DJI Go 4 app. This is a brand new app that was only released in late 2016 and so even seasoned DJI fans may need some adjustment.

This app works with the Phantom 4Pro and Pro+, the Mavic Pro and of course the Inspire 2. Which is why we’re talking about it.

The app had a pretty rough start with many users complaining of device crashes and other reliability issues, but the latest user reviews seem to be very positive.

The new features and improvements in the latest app may not be all that apparent at first, but after just a little while you’ll notice cool new additions.

For one thing, DJI has managed to reduce the latency in video transmission. Referring to it as “near real-time”, which is kind of important if you’re going to do any FPV flying.

Camera controls have also been expanded and you can make more mid-flight adjustments to the camera than ever before.

The built-in video editor is also much better and the latest update has added the ability to import locally-stored music.

The return-to-home system has been improved and a single tap can bring your expensive equipment back to base automatically.

The new app is more incremental in its improvements, but it’s well-suited to this new generation of craft. 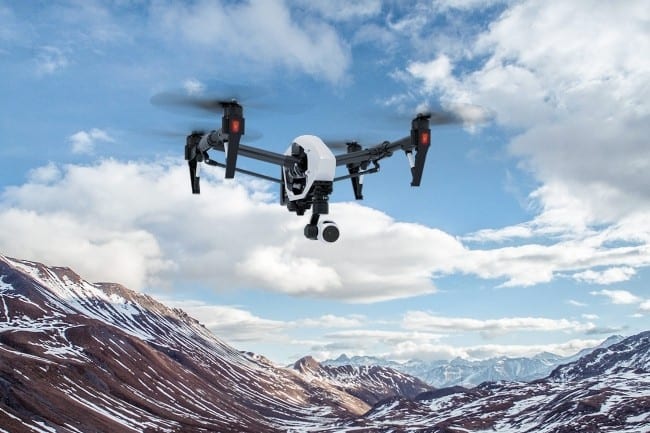 When the commercial drone Inspire 1 launched it came with a $2900 price tag. The Inspire 2 has pretty much the same price. We all know that means a price drop for the original, which is still sold by DJI.

The Inspire 1 is now going for a full grand less than the new hotness represented by the Inspire 2, which makes for a pretty hard choice. The Inspire 1 is still a great commercial drone and if you already own one it’s hard to justify dropping the extra money for the Inspire 2.

Lost of people are however going to make the upgrade and it may be worth considering one of the used units on the market.

On the plus side for the newer model, the battery life is almost twice as long, thanks to the dual battery system. Whereas the Inspire 1 ran out of puff after about 18 minutes, the Inspire 2 can stretch to 27 minutes in a pinch. The new drone hits 58 mph while the original maxed out at 49 mph. For many filmmakers that extra speed is enough reasons to spring for the more expensive model.

The big draw is that FPV camera and the object avoidance system. Both features that were completely absent in the Inspire 1. Saving a thousand dollars doesn’t mean much if it comes crashing down. The Inspire 2 is much less likely to meet a bad end. 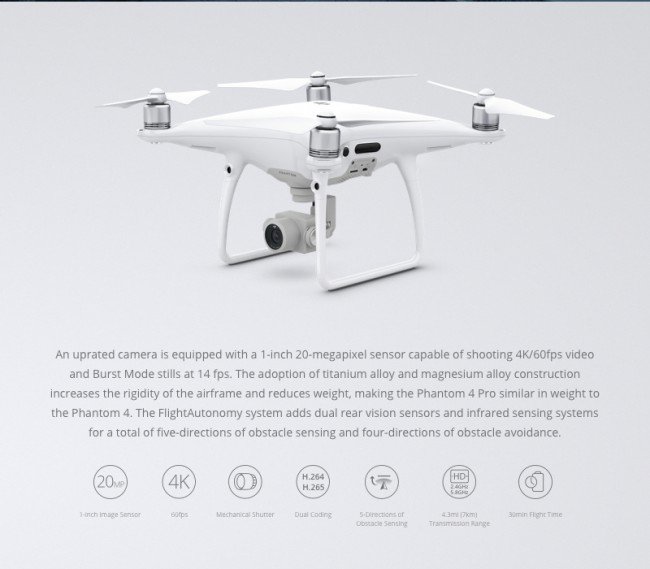 The DJI Phantom 4 Pro retails for about the same price as the Inspire 1 does at $1500. There’s more to it than that though. With the Inspire drones you have to factor in the cost of the cameras. The Phantom 4 Pro comes with a camera included in the price. The premium combo for the Inspire 2 on the other hand, weighs in at a hefty $6200. You can slice off a little by going for the X4S instead, but it’s still not cheap.

The Phantom 4 Pro can stay in the air for about 30 minutes, so there’s no flight time advantage.

The main drawback is the camera. While the 4K camera that comes with the Phantom 4 Pro isn’t exactly low-end, it just doesn’t match up to the professional optics, stabilisation and RAW video quality the Inspire 2 can provide.

Add to that the fact you only have one camera and lack the dual-control possibilities that this provides. Which means many shots simply won’t be possible with a Phantom 4 Pro. The Inspire 2 and Phantom 4 Pro are simply built for different purposes.

The bottom line is that the Phantom 4 Pro isn’t really a professional drone. At least not in the sense that professional filmmakers would be happy with it. It’s a great drone at a good price. Aerial photography companies should be hunky dory with a fleet of Phantoms. Someone making a professional documentary might look elsewhere.

Flying Too Close to the Sun? 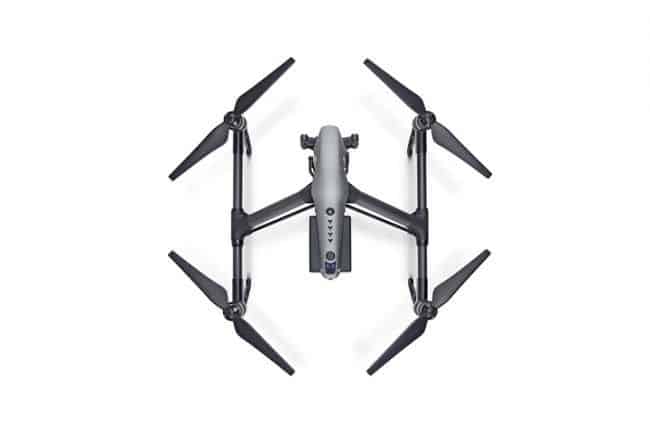 Taken on its own merits the Inspire 2 is a true next-generation camera drone replete with features that really are essential in hindsight. We’ve been flying as much on faith as battery power these last few years, but the Inspire 2 feels like a polished and mature product. This is more Airbus than Wright Brothers at Kitty Hawk.

It’s clearly superior to cheaper drones such as the Phantom 4 and its own predecessor, but that’s not the biggest problem that the Inspire 2 faces. While the latest Zenmuse cameras that are compatible with this drone are excellent units suitable for professional film applications, they are hardly cinematic. Monsters like the Matrice 600 may be much more expensive than the Inspire 2, but their ability to carry heavy 3rd-party camera payloads make them the only choice when you need absolute camera quality.

The Inspire 2 and Matrice 600 aren’t exactly butting heads at the moment, but the technologies are getting cheaper by the day and we may only be a generation or two away from having to make the choice between the something like the Inspire, with it’s limited OEM camera options and the Matrice, which can heft up more options and presumable more will be coming.

On that note, it’s a pity that the Inspire 2 can’t use cheaper cameras than the two Zenmuses. It’s easy to imagine buying the core drone with a cheaper camera and then buying the more high-end option later. Right now, it’s an expensive all-or-nothing deal.

In the end the Inspire 2 is one of the most advanced camera drones available today. If the footage from the available cameras are good enough for your needs then you’ll be hard-pressed to find a safer or better-performing platform for the price. 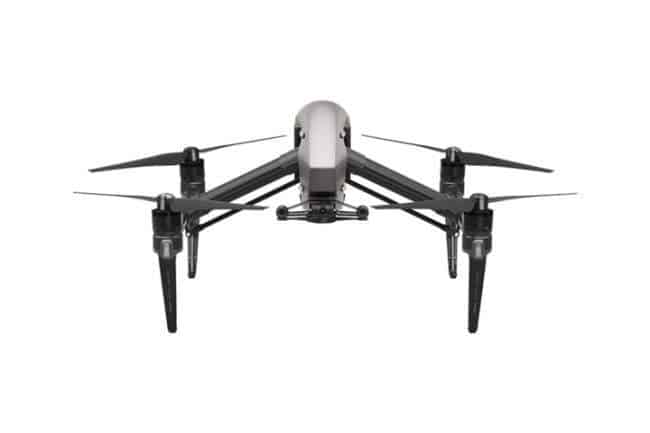