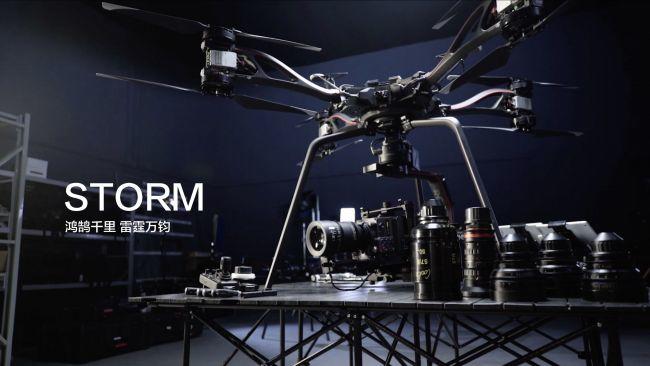 If you’ve been living in a fallout shelter for the past decade or so, first of all, you might want to turn around and give it another decade or so. Also, you might have no idea that DJI is basically the leading commercial drone manufacturer in the world. We’ve waxed lyrical about their high-end drones, such as the Inspire, but it turns out the company has been holding out on us. They’ve made an ultra-advanced, heavy lift camera drone that you can’t buy from them. Not at any price. Instead, they’ll rent this monster out, but it comes with more than you’ve bargained for.

Whipping Up a Storm

The beast in question is known as the Storm and you won’t find it on the DJI storefront. No, this drone is only available through another sub-brand known as DJI Studio. If you give them whatever amount they’re asking, you won’t just have access to the Storm. Nope, you’ll also have the chance to meet new people, as an entire drone film crew will show up as well, in their specialized van.

We have to assume that flying the Storm is just not something that DJI can entrust to anyone with the money. The Storm is massive, making even the honking-large Matrice 600 look tiny in comparison.

The Storm can fly at fifty miles per hour, carry a 18.5 (40.8lbs) payload and do it for 15 minutes. As you can imagine, that amount of payload capacity means this drone can lift cinema-grade gimbals and cameras.

Getting info on the Storm is a challenge, since it’s only testing in China, barring a single unit that’s made it to the US.

The Verge speculates that something like the Arri Alexa LF camera with a Ronin 2 gimbal might be what you’ll see attached to a Storm. Something that you can confirm by looking at press shots and video material as well.

While you need to brush up on your Chinese in order to read any of the online info, there’s a great video of the Storm outlining all the most important info and showing the machine in action.

The  “dedicated production vehicle” turns out to be a small truck filled with gear and professional camera crew people. We have no idea how much it would cost to use this platform, but if you have to ask you probably can’t afford it. Now, how about a folding version, DJI?