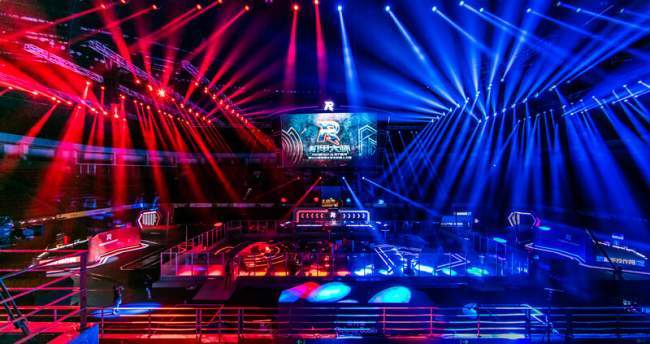 When I was a kid, the sorts of robots we got to play with, well. sucked. Now we have flying robots, rolling robots and incredibly advanced toy robots all over the place. A career in robotics is one of the most promising options, if you still want to be employed after the fourth industrial revolution. At the very least our future robot overlords are going to need someone to grease their joints and replace parts!

In all seriousness, DJI’s fifth Robomaster competition offers both a bit of entertainment for lovers of robotics and a serious educational opportunity for its competitors. If a robotics competition with a giant like DJI behind it sounds appealing to you, read on for the details!

The competition is all about engineering skills and scientific application of technical knowledge. DJI wants to get people into fields like machine vision, artificial intelligence and other crucial disciplines needed to improve the state of drone tech. So it makes perfect sense for them to pour some of those massive profits into hyping up the youth.

At the same time, we get to watch a totally new team-based robot combat show. Of which there have been too few over the years.

How Does it Work?

Do you know a little show called Robot Wars? It’s a program where people build their own robots from scratch and then have them fight to the death. Yeah, it’s pretty great, but Robomasters is absolutely nothing like that.

First of all, the contestants don’t have to build their own robots. Instead, DJI has created several standard models that the teams can use.

The other big difference is that this is not a one-on-one combat game. Instead each team has seven robots, consisting of three Standard models, one Sentry, one Engineer, one Aerial and a Hero.

The robots are both pre-programmed and directly piloted using FPV. The robots can shoot projectiles, but no actual damage is done. It’s sort of like Nerf for robots. there are sensors on each bot that registers a hit. When its HP level is whittled down enough, it’s out of the game.

The game uses a best-of-three matches setup. Each match lasts seven minutes. Each team has a base with a mass of HP. Whoever has the most base HP at the end of the match wins, unless someone’s base hits zero before that.

The challenge comes from the fact that the robots themselves don’t have intelligence. They can navigate or traverse the arena as they are. The team has to imbue them with the software brains needed to win. Which should make for an interesting and unpredictable game.

Players can also modify the robots within the rules, which is 100% necessary to overcome some of the obstacles in the arena.

The total prize pool for 2019 is a staggering $600 000! There are 173 teams registered, so it was a massive competition overall. Four teams took part in the August 2019 final tournament, with the top 32 teams competing for the championship.

The first prize is $75K, the second is $45K and the third id $15K. Considering that DJI provides the hardware, that’s actually pretty fantastic!

Where to Catch It

The good news is that you can watch the entire competition for free! It’s all available on the RoboMaster Twitch Channel. The same place where you will likely get to see the 2020 competition, when it is announced. So if you have an internet connection, there really is no reason not to indulge in some robot-on-robot action.

Say Hello to the Robomaster S1 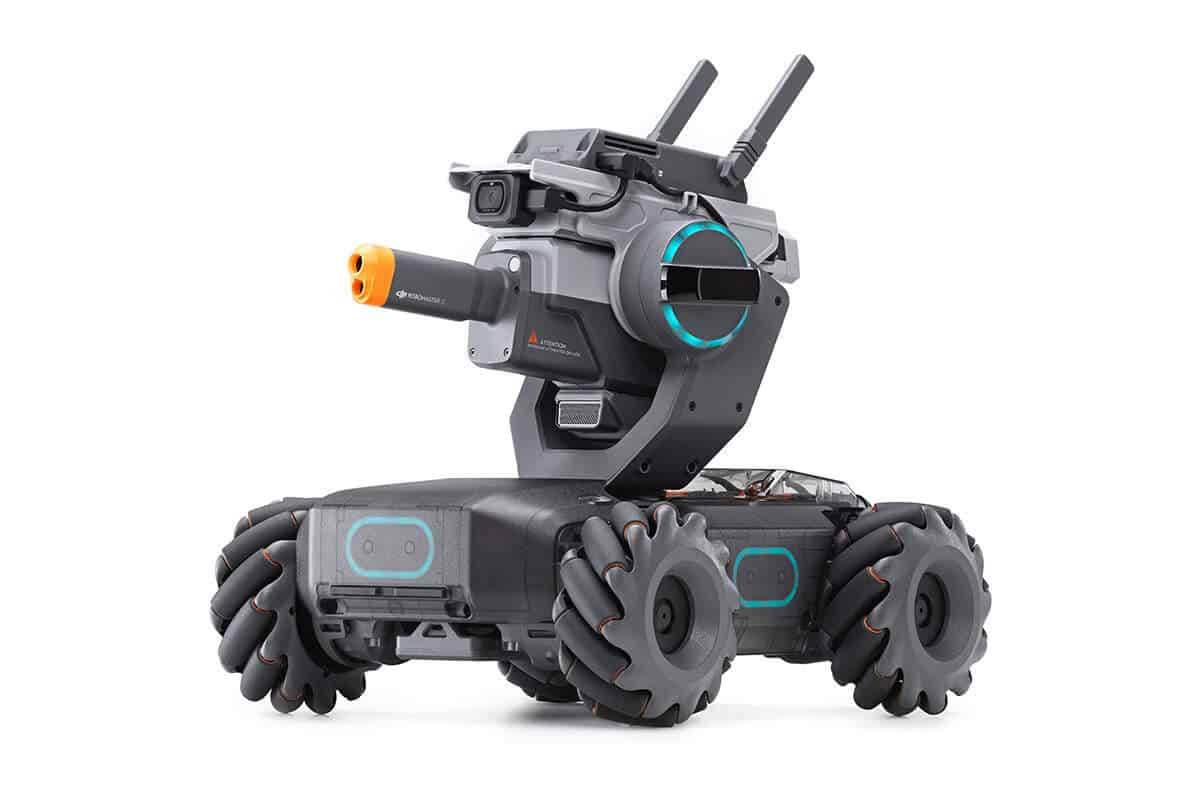 So you’ve watched a bit of RoboMaster and it’s got you all excited. Well, the good news is you don’t just have to watch other people have fun with these robots. DJI will sell you their RoboMaster S1 for a pretty reasonable $549. It’s not exactly like any of the bots used in the competition, but it’s got the same basic platform and lets you learn how to code and figure out how to get this amazing little robot tank to do all sorts of things.

It’s a very impressive piece of kit. It has six AI modules and a multitude of sensors that let you control it by gesturing, clapping or, er, hitting it. There are 46 programmable components in total, so you really can create some pretty freaking custom behaviors and functions. If you want to learn about math, science, AI or computer programming this has to be one of the most complete tools to do so on the market. Best of all, you can program it to shoot your neighbor’s cat when it sneaks in the house and tries to make off with your aquarium fish. Well, that’s what I’d do anyway.

Become adept enough with the S1 and maybe you could be the next star contestant on RoboMasters! 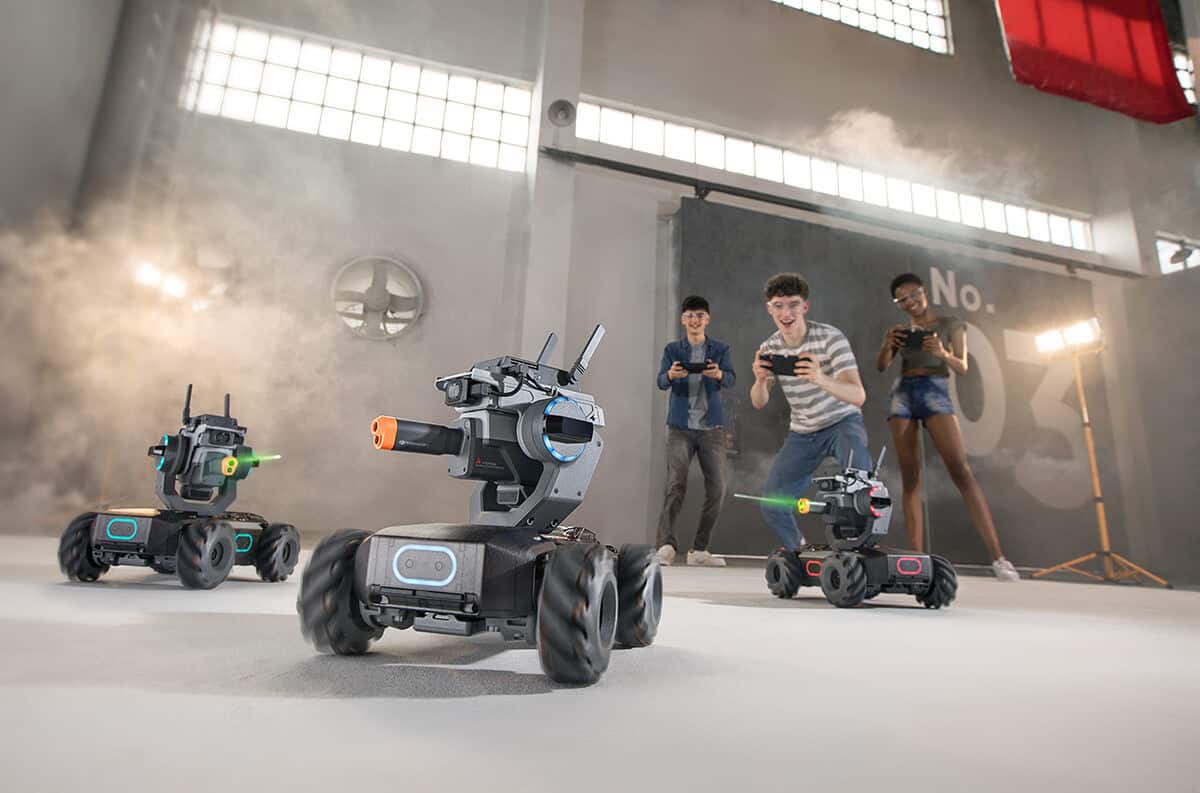 RoboMasters has them all outdone when it comes to panache. It takes the spectacle and audience-friendly excitement of Robot Wars and combines it with the true educational value of a university robotics competition. No robots are blown up or cut to pieces, but the action is fast and furious!

I hope DJI keeps sinking all the money we keep giving them into projects like these. Not only do they provide some quality free entertainment, but I can easily imagine the world’s next top robotics engineers coming from participation in something like RoboMasters. So roll on 2020!