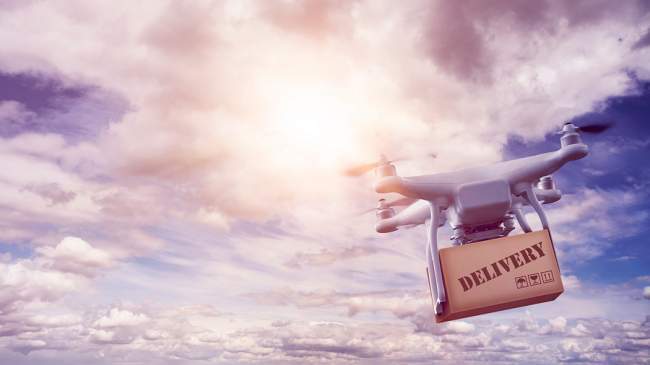 If you listen to Big Ideas(TM) companies like Amazon, the future is going to be filled with drones. There will be thousands of delivery drones buzzing overhead, ferrying iPhone 20s and PlayStation 12 consoles.

Some big drones will also be carrying people. Companies like Ehang and Kitty Hawk already have autonomous passenger drones in the prototype stage. So this isn’t just pie in the sky. The government also wants to put drones into service, especially in law enforcement.

Although most modern drones have enough intelligence to avoid flying into things and making it to their destination, there’s a limit to what can be done individually. In the end there will have to be some sort of central air traffic control for drones. Just as their is for manned aircraft today. While most people in the drone business would probably agree with this as a future need, General Electric is getting ready to provide a solution now.

A Rose by Any Other Name

The system being punted by GE is called AiRXOS. First of all, I have no idea how to pronounce it and secondly, someone fire their marketing people. While it’s a cool name in a Top Gun sort of way, it doesn’t exactly roll off the tongue. It’s more of a drunken stumble, to be honest.

What matters more than the name behind this new GE venture, is what the company plans to do.

Opening Up the Skies

GE thinks that this new company can help ease restrictions on drones today that come from safety concerns.

Lets take the federal rule that says drones must remain within sight. That makes something like Amazon Prime Air tough to pull off. Amazon has to devise a solution to make their drone delivery safe and then convince the FAA to give them an exemption.

That might be doable for Amazon, but every single entity that wants to step outside the very limited existing flight rules has to go through the same process independently. This is the gap in the market GE thinks they can fill. A standardized air traffic control safety system that will let anyone who signs on operate outside of what’s currently allowed. To some extent at least.

So What is It?

In their official blog post GE describes AiRXOS as a combination of hardware systems, software and services. Together these form infrastructure that will allow the monitoring and control of all drones in that airspace. This could include providing drones with information on weather condition and obstacles in their path, as well as other drone nearby one must assume.

Right now AiRXOS is going to be a very manual service, especially when it comes to legal paperwork. However, the end goal is to have it all automated so that anyone can easily make use of the system.

The service is going to roll out in Centerstate, New York for now, although I couldn’t find and exact date. GE has indicated AiRXOS will be rolling out several project by mid-2019.


Sydney Butler
Sydney Butler is a prolific technology writer with a knack for digital gadgets and a love of flying things. He's been messing with tech since the early 90s and dreams of the day that quadcopter hoverbike finally goes on sale.
Latest posts by Sydney Butler (see all)