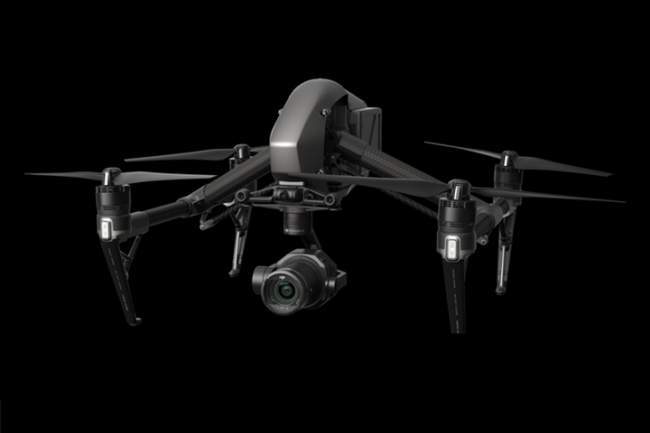 We’ve come a long way from duct-taping GoPro cameras to the bottoms of drones. Modern OEM drone cameras are pretty great given that they have to be as small and light as possible.

The Zenmuse cameras from DJI have always been a solid OEM camera option and they’ve beefed up the range considerably over the years. From the X3 to the X5S, there’s always been a pack-in camera that could deliver on a range of photography and videography needs.

However, if you really wanted  professional-level imagery , the only way to really get it was by buying a heavy-duty drone and then attaching a traditional DSLR or cinematic camera to it.

Obviously this is not an ideal solution. Dedicated high-end cameras are heavy. They have plenty of glass and metal components after all. Camera makers also generally don’t think of things like weight distribution or aerodynamics.

So it’s a great relief that DJI themselves have stepped up to the plate and decided to create an OEM camera that could help fill that gap. 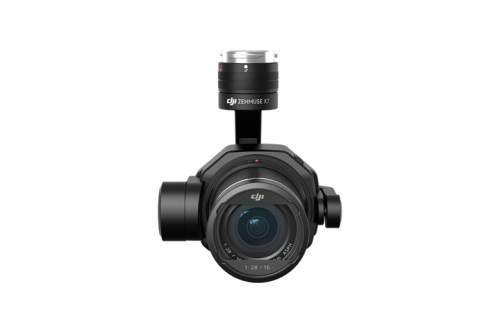 The Zenmuse X7 has the distinction of being the  first Super 35mm cinematic camera made specifically for drone photography .

If you didn’t know, Super 35mm is the cinematic format derived from 35mm film. Despite having the same basic specifications as larger cinematic cameras, it’s a compact little number.

Without a lens fitted the X7 weighs in at a scant 449 grams. Obviously the total weight will change a little based on which lens you end up using.

It also uses the new “DL” lens mount. This mount apparently cuts down on weight and size while still allowing the image quality to be “cinema grade”. DJI says this mount design improves stability.

At the moment there are four lenses supported by the X7. All have an aperture of F2.8. The sizes are 16mm, 24mm, 35mm and 50mm. Both electronic and mechanical shutter speeds are rated at 1/8000, with the exception of the 16mm model. 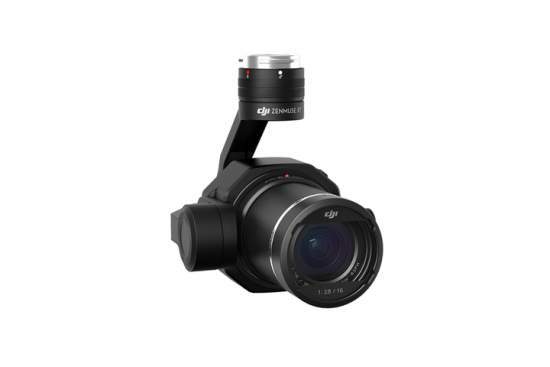 An interesting factoid that DJI provided in their spec sheet is how the X7 has significantly bigger physical pixels than previous Zenmuses. It’s now 3.91 μm rather than whatever the previous cameras were. Look, the point it the X7 has the biggest pixels and bigger pixels are better because of more light or something. 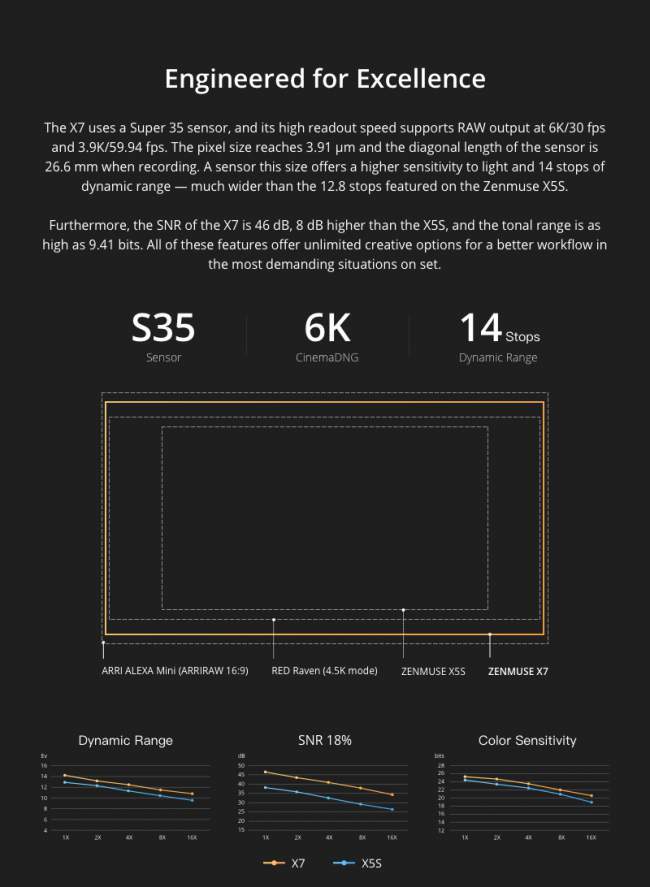 As you can tell by all the fiddly numbers, the X7 is a pretty serious piece of kit. Unfortunately  only owners of the DJI Inspire 2  need apply. Dont get me wrong, the Inspire 2 is an excellent drone, but DJI has plenty of great drones and most people are unlikely to buy a whole drone for a camera if they already own one.

To their credit, DJI have stated more supported models are coming, but haven’t said which or when. That makes it pretty hard to plan if you’re looking for a cinematic drone cam.

If you are in the market for a new camera drone, the Inspire 2 won’t disappoint and it makes sense to pair it and the X7.  It really sucks that the Inspire one couldn’t be brought to the party, but there you have it.

The Proof is in the Pudding

The great things about shopping for a camera is that you don’t need to test it yourself to know if it can produce good footage. The web will always provide many sample produced by the camera in question.

For example, look at this video provided by DJI itself.

Hey, not bad! Although that guy on the skateboard really should be wearing a helmet. Safety first guys.

Of course, that video is the product of DJI itself, so it’s fair to question how cherry-picked the footage is or of it’s been fiddled with extensively.

Luckily a few people already have their hands on the camera, so there are some more independent clips out there.

Here’s a clip made by someone with no obvious connection to DJI. It looks pretty good to me.

Obviously, since this has been through the YouTube compression grinder it’s not a perfect test, but I think we can all agree the X7 is hardly bad. The fact that it has 14 stops of dynamic range really shows as well. It handles the shadowy and brights scenes with aplomb.

Should You Go For It?

If you already own an Inspire 2 and want to make the best footage possible, the X7 seems like a good idea. At nearly three grand without even a lens, it’s a big purchase, but either you need it’s cinematic chops or you don’t.

If you don’t have (or want) an Inspire 2, well it’s hard to say that you should wait without clear timelines on wider support. What is crystal clear is that DJI has its eye on the market currently dominated by companies like RED. Time will tell if it becomes a fair fight.