You know, just as you think you’ve picked out the best possible product in the range, they always come out with some just a little better. The XXL version or the Gold Edition. That seems to be what we have here in the DJI Mavic Pro Platinum.

The Pro Platinum has a shiny new paint job, but is this new model any different or just the same old Mavic with a new look? 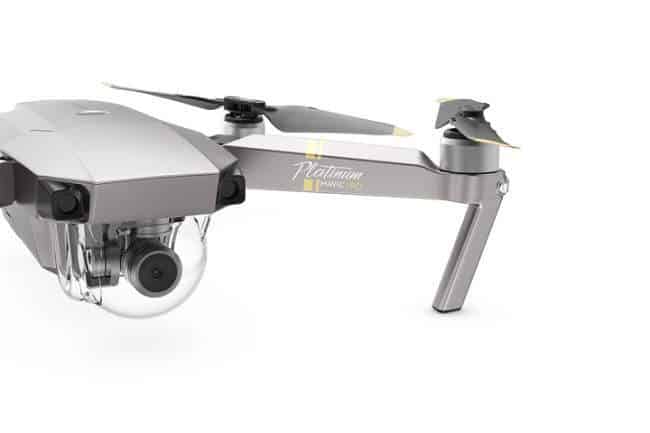 The Mavic would not look out of place in a movie set 20 years in the future, it’s that good.

The Mavic Pro Platinum is a compact camera drone from the drone juggernaut DJI. It’s a compact, foldable camera drone equipped with some of the most advanced technology DJI has developed over the course of its many drone models.

The Mavic Pro Platinum is a rather distinctive-looking machine and doesn’t resemble any of the other models from DJI or really anything else on the market. The most striking piece of the design (other than the folding arms) is the clear protective bubble that surrounds the camera and gimbal assembly.

This is a drone which has been designed from the ground up to be compact and portable. You can fold it up and throw it in your backpack in a way that’s simply impossible with something like the DJI Phantom.

This is probably why the Mavic Pro Platinum has so many rounded corners and smooth surfaces, so that you don’t have to worry about it catching on things or resiting when you try to move or store it.

One positive side effect of this (at least in my opinion) is that both the Mavic Pro Platinum and the non-platinum Mavic Pro are two of the coolest looking drones you can buy.

The Mavic would not look out of place in a movie set 20 years in the future, it’s that good.

the real target was the one thing that drone consumers really want: longer flight times.

The Mavic Pro Platinum carries about a $100 premium over the standard Mavic Pro. When we’re talking about drones that cost in excess of $1000 that’s not a huge difference, but you still want to get value for your money. So how do DJI justify the slightly-higher price tag?

While there may be a few small tweaks here and there with this model of DJI Mavic, the headline differences between this and the original boil down to how quiet the Platinum is, how far it can fly and of course how much it costs.

Other than that this it sports a shiny silver look and propellers that are visibly different to those found on the standard Mavic Pro. In all other regards it’s pretty much the same machine we already know and love. Let’s dive a little deeper into those differences, shall we?

How Quiet Is It? 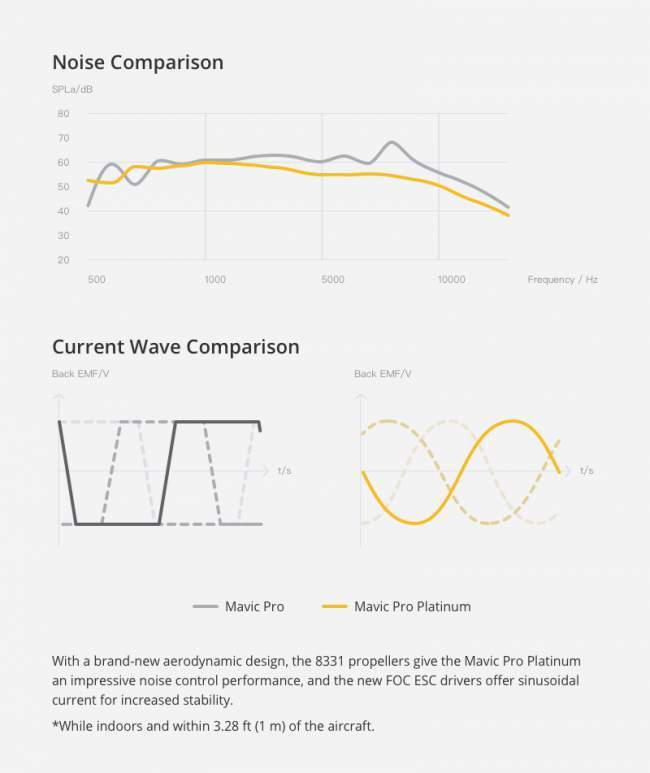 DJI claim to have reduced the noise made by the Mavic Pro by 60 percent in this platinum edition.

Before you ask, no it’s not the silver paint that did the trick. Instead they redesigned the props and upgraded the electronic speed controllers to achieve this dramatic effect.

How did they measure this 60 percent reduction?

It was taken indoors, one meter away from the machine. That’s actually very impressive, but it’s not as if modern drones are very noisy to begin with. It will be up to each person to decide if they think that halving the noise level of a drone at one meter is worth the extra money, but sound volumes drop of quickly as distance increases.

Moreover, if you’re outside ambient noise will quickly equalize the noise differences as sounds that are louder than either Mavics drown them out.

So basically this is useful for close-range indoor filming or if you want to film while hovering just outside someone’s window without being detected. But who would want that other than the CIA or FBI? I’m pretty sure they roll their own drones anyway.

How Much Have Flight Times Improved?

Honestly, I think the noise reduction was just a happy accident which the DJI marketing department has pounced on with glee. No, the real target was the one thing that drone consumers really want: longer flight times.

In this DJI have succeeded.

Whereas the standard Mavic Pro sports a (very respectable) 27 minute flight time, DJI claims a full 30 minutes for the Platinum. It seems modest, but that’s an 11 percent improvement. Hats off to DJI for what must have been a difficult engineering task.

Is that improvement worth the $100? That depends on what you use your drone for. Some people really need that extra flight time, for everyone else, well they might as well save the money.

One thing that has not improved compared to the standard Mavic is the control range. Both models are rated for a maximum range of 7 kilometers. Given that this is such a dinky and portable professional drone it’s not a number to be sniffed at and there really was no reason for DJI to improve things here. Most users are not going to require a control range anywhere close to that.

The Ocusync technology that ensures HD streaming over such a long distance is still highly impressive and remains one of the standout features in the Mavic range. Obviously it’s also compatible with the excellent DJI Goggles.

As I’ve come to expect from DJI, they’ve built quite a bit of autonomous flight smarts into the Mavic and it’s all still present and correct in the Pro Platinum. In other words, the Platinum is no smarter than the regular Mavic Pro, but at least it’s no dumber.

The drone has a suite of sensors that tell it how far away the ground is and if any objects are within 15 meters of it. This allows it to fly level relative to the ground and automatically avoid obstacles. DJI says that it can safely avoid crashing into stuff at up to 22 miles per hour, which is 36 kilometers per hour. Good news if you’re not fabulously wealthy.

More good news is that DJI have taken a leaf from the aeronautical big boys and have equipped the Mavic with redundant sensor systems in case something fails. Your Mavic should automatically switch over to the backup and allow you to safely land so that it can go in for repairs.

It’s a far cry from the early days where people would crash their Phantoms into walls minutes after unboxing them. 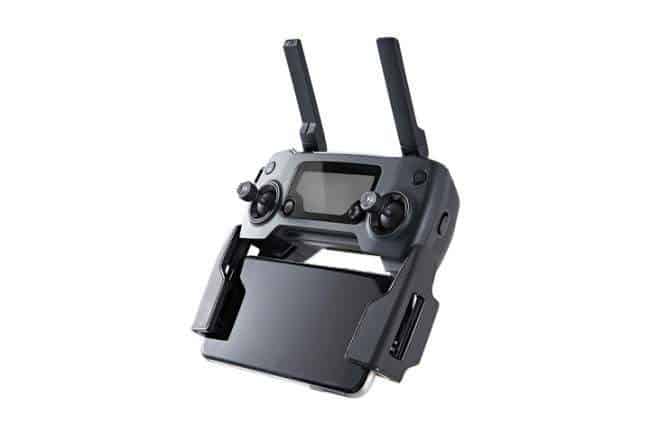 The controller that comes with the Mavic is also the same unit you get with the standard model. It continues the overall design philosophy of the drone which centers on portability.

As far as professional-grade drone controllers go this one is pretty small and when not in use folds up just like the Mavic itself. That includes the holder for your phone, which acts as the FPV receiver.

You can also control the Mavic just using your phone, which is actually quite practical given how much flight autonomy the drone has. Using the actual remote with a phone gives you more options however and that’s what I’d recommend. After all, if you have space to pack the actual drone, then surely you have space for its dinky controller? 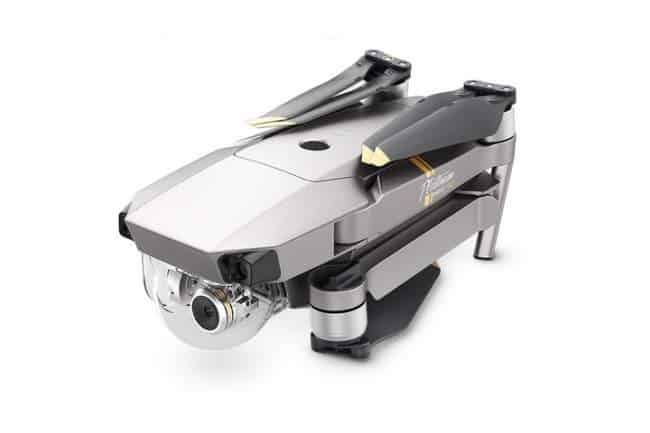 The Mavic Pro line makes use of a camera with a native 4K sensor. It can shoot 4K video at 30 frames per second. The camera is paired with a number of smart technologies meant to help you take good footage or pictures without needing a dedicated camera operator. Basically it has a number of machine vision abilities that lets the drone recognize the subject of the shot and then keep it in frame while you work the sticks.

In trace mode the drone will lead or follow a specific subject. Profile mode keeps the Mavic by the side of the subject, giving you a profile shot. Spotlight mode lets you fly around while the camera stays locked onto the subject.

There’s also a gesture mode, which we’re seeing more of and is a core feature of the controller-less DJI Spark. It lets you take easy selfies by using hand gestures.

There’s also an indoor photography mode DJI have dubbed “tripod mode”. Basically the drone is ultra slow and ultra stable. Although I have to wonder how small the space has to be for this to be needed and then why you wouldn’t just use an actual tripod.

I have to say something about the gimbal as well. DJI says that there is no digital image stabilization at work here. So all of the sensor is used to capture actual footage and not for stabilization redundancy.

The Platinum edition uses exactly the same DJI intelligent flight batteries that the regular Mavic does. They are totally interchangeable. These batteries are pretty pricey at about ninety bucks a pop. They are pretty beefy though at 3850 mAh. 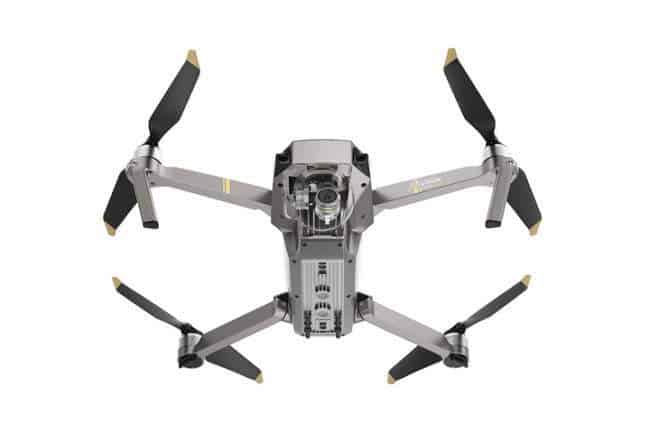 Apart from all the performance specifications, a major selling point of the Mavic Pro line is how compact it is. When it’s folded up the whole thing measures about 83x83x198 millimeters.  Folded out the drone measures a little short of 400mm diagonally, without the props it’s 335mm. There’s no arguing that this is a small machine.

To compare, the ultra-compact Spark measures 170mm diagonally without the props fitted. That almost exactly half of the span.

The Inspire 2 measures in at 605mm, so the Mavic is almost exactly halfway between those two extremes. If it weren’t for its folding ability the Mavic would almost be too big, but at a weight of 750-ish grams and with those folded proportions I can’t think of another 4K drone that’s this luggable.

For an extra $200 you can get the “Fly More” combo which includes a battery charging hub, two extra batteries, a car charger, a battery to power bank adapter, an extra prop set and a shoulder bag.

Given that just two batteries will run you a bill of $180 it’s actually an incredibly good deal and if you are going to go for the Platinum the fly more combo makes a lot of sense.

Boy has DJI made this a tough call. I have a really hard time figuring out who exactly the Mavic Pro Platinum is actually for. The performance differences between the standard Pro and this one are so slight that I’m not convinced they are worth $100 more money. Yes, the noise reduction seems dramatic, but as I said above it’s not as if the regular Mavic is deafening and I don’t see it making much difference in practical day-to-day settings.

Make no mistake, the Platinum Mavic is clearly a better drone than the standard one, but I get the feeling that these are the finishing touches that DJI wishes had been in the original Mavic, but had to abandon in order to get to market.

The improvements are so marginal that anyone who owns a Mavic Pro already would be crazy to “upgrade” and if you’re in the market for a new drone, you’d really need a specific use case for less noise and three minutes of extra flight time.

Ironically, if the Platinum was not painted in its unique silver livery, I might be more inclined to buy it. I’m the type of person who like to know that I’ve bought the best model of something, even if it’s disproportionately expensive. That’s why I have an iPad Pro instead of an iPad Air. The difference is that no one but me can tell that I overspent on a fancy tablet, whereas the silver paint on the Platinum might as well be a scarlet letter advertising stupidity to the whole world.