Virtual reality headsets have constantly been in the news of late. Since 2016 when products like the Oculus Rift and HTC Vive launched, we’ve been inundated with pictures everywhere of people wearing these goofy goggles.

So it seems VR is finally here, but what does that have to do with drones? It turns out that drones have been using a rudimentary headset technology for quite some time. FPV or first-person flying involves taking an onboard camera feed from your RC craft and transmitting it to a pair of video goggles. This is incredibly cool as far as RC flight experiences go, but not very sophisticated.

Back in the VR industry, Google has the wacky idea of making a VR headset that could take a smartphone and repurpose it. That was called the Google Cardboard and it became quite a thing. It was called the “Cardboard” because it’s literally made from folded cardboard with some lenses glued in.

Other manufacturers (and later Google itself) ran with this idea and started making smartphone VR headsets from more permanent substances. Drone makers took note of this trend and started making apps that would let you turn that setup into an FPV headset. See how it all comes together?

Now DJI have gone ahead and created a complete standalone headset that takes inspiration from the latest VR products, while bringing plenty of drone-specific features. A product they’ve inexplicably decided to name the DJI Goggles.

What’s in a Name?

It’s a little weird for a company known for fanciful product names to be so literal-minded. “Here’s our Mavic, our Spark, our Inspire oh and these are our Goggles.” It just seems a little out of place.

What isn’t out of place is the design and apparent quality of the unit. It’s not going to avoid the dorkiness of wearing a headset in public completely, but the modern white shell doesn’t make these Goggles look like a cheap toy. 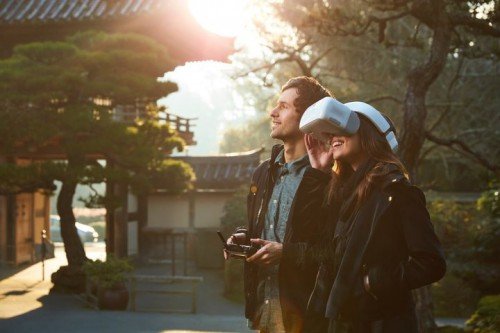 So is this a fair price? Well, my opinion is that the price is in fact fair. When you look at the tech built into the goggles as well as the overall set of features and quality of the optics, it suddenly doesn’t seem all that expensive.

Coming at a Price

Speaking of which, DJI are slinging these puppies at a stiff four hundred and fifty bucks. That’s a substantial chunk of change. Far more than a mobile phone VR setup would usually cost. In fact, that’s pretty much in line with high-end VR headsets such as the Oculus Rift.

So is this a fair price? Well, my opinion is that the price is in fact fair. When you look at the tech built into the goggles as well as the overall set of features and quality of the optics, it suddenly doesn’t seem all that expensive. It also helps that if you are a DJI fan and are likely to own multiple drones, this will work with quite a few of them. So though the Goggles themselves might cost more than some of the individual  drone models, seen as a multi-drone solution it’s not bad at all.

One thing I did notice in the FAQ is the fact that the Goggles have no protection against water or dust. Now, I understand that you should not be flying in inclement weather to begin with, but you are going to be using these outdoors. Which means keeping an eye on the weather, avoiding places with dust or high humidity and making sure that if your Goggles are not on your face, they’re in their case. Hey, that rhymes!

Built for Comfort, Not Speed

The DJI Goggles are designed using the latest trend in VR headwear. Like the Sony PSVR and Microsoft line of VR headsets, there is only a single headband and a hinge mounting for the goggles themselves. That means you can get back to your immediate surroundings in a second by flipping up the display. That may be needed for landings or if your video feed gets cut off for some reason.

The two parts can be separated, with the headband folding up. Each component weighs about 500g, for a total of about a kilo. That’s about 2.2 pounds for any readers who only know medieval systems of measurement.

The headband is the bit that contains the battery, which is a substantial unit. However, putting the weighty battery in the headband is a pretty smart move, since it acts as a counterbalance to the weight of the display unit. It also means that you shouldn’t feel discomfort at wearing a 1KG device on your noggin. 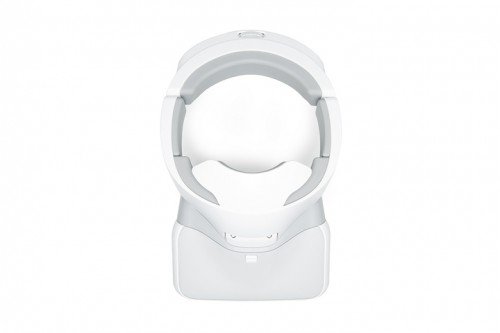 Overall the design is pretty darn good, although personally I would have preferred a black version. White plastics tend to show dirt, grime and fingerprints pretty quickly. Since you are outdoors and touching the goggles with your grubby paws all the time.

The Curious Case of Many Buttons

The Goggles are much more than just a shell to house some screens. There’s a touchpad on the right-hand side of the unit that lets you navigate the menus on the device. There’s also a function button and a back button. Each one has a unique surface so that you know which button you are pressing without needing to look.

The power button is one of the most attractive I’ve seen as well. I know that’s not the sort of thing a normal person should say, but the design of the power button influence the look of the Goggles. It pushes them into the polished consumer product territory and it inexplicably friendly to my eye.

The focus adjustment ring is right by the two button controls. All the controls can be operated with only your right hand, which means you can maintain at least throttle control on Mode 2 transmitters.

The whole design of the Goggles has clearly been thought out carefully by DJI and it shows.

The stars of the show are the two 1080p display panels inside the Goggles. Usually, mobile HMDs will take a single display panel and split if down the middle with a divider. Each eye then gets about half the resolution of the panel in terms of display quality.

What DJI have done is ensure that each eye can get the maximum 1080p picture. As far as I can tell there’s no talk of stereoscopic image support yet. Which makes sense since none of the DJI drones have 3D cameras on them. It would be pretty cool if the Goggles could get support for such a device should it ever be released, but that’s just pie in the sky at this point.

The display panels support a maximum refresh rate of 60Hz, which means that you can see 60 fps video just fine. If you want to see video at that speed using a wireless connection you’ll have to settle for 720p though, thanks to bandwidth constraints.

Each panel is five inches in size, which provides a total field of view measured at 85 degrees. That’s pretty decent for FPV goggles, but comes in a little short of the minimum standard for VR immersion at 90 degrees. Considering that some drone camera models have wider fields of view, it is a pity. In the case of the Mavic that number is actually something like 78 degrees, so you won’t lose anything there.

Since everyone’s eyes are not the same distance apart, DJI have included an adjustment for IPD or interpupillary distance. The exact range is 58mm to 70 mm. I assume this covers most non-mutants.

Unfortunately one of the best tricks built into the Goggles is also its most limited. OcuSync is the company’s advanced wireless video transmission technology. It has very little latency, but so far only the DJI Mavic has it built-in. Older drones from DJI will need their controller hooked up via a cable.

The Spark, Phantom 4s and Inspire 2 can be hooked up via cable. Presumably DJI plans to build OcuSync into its future drones, which will then just sync directly.

DJI states the maximum transmission range as the same for whichever craft you are using. This makes sense since with the exception of OcuSync drones you’re piggybacking off the bundled transmitter anyway.

The downstream latency figures are pretty interesting. The drone with the slowest downstream link is the Inspire 2. Combining it with the DJI X4S camera give you 190 ms of latency. The Mavic via OcuSync is predictably the fastest, yielding only 110 ms of lag. Everything else falls somewhere in between.  Most of the decent figures rely on optimal transmission conditions using 720p resolutions. However, for FPB 720p is really enough. Fast latencies and high framerates are more important for piloting purposes than a higher resolution if you ask me.

As I mentioned earlier, the battery is a hefty unit. More specifically, it’s a 9440 mAh brick. The good news is that you can get up to six hours of operation from your Goggles before they need a recharge. Given that even DJIs best flight times only hit about the 30 minute mark, you’ll get plenty of flights in the bag on a single charge.

The main feature that sets the DJI Goggles apart from plain old video goggles is the  inclusion of head tracking . What this means is that when you turn your head, the Goggles send the motion data to the drone’s gimbal. So when you look right the camera looks right too. This is incredibly cool and reminds me of the head-tracking targeting in military craft like the Apache helicopter.

Only some drones support this feature, but more will be added with firmware updates. So when you read this, just check whether your specific drone now supports head tracking with a quick Google search.

This is by far the neatest thing about the DJI Goggles in my opinion. You can rig together cheap FPV with a phone and a plastic case easily these days, but nothing is going to match the smoothness that DJI has achieved with their own setup.

This brings up the interesting possibility of doing more serious camera work without the need to have a buddy using separate controls.

The DJI Goggles present an interesting problem when trying to decide if they are worth recommending or not. I don’t think there’s any doubt that they work as advertised. I also  don’t think that there’s a more advanced or elegant FPV product on the market.  I also think that if you are investing in a compatible DJI drone you’d be silly to use another FPV product. The choice with any other sort of drone is less clear. Since the Goggles have an HDMI input, you can technically use it with non-DJI drones. As long as you’re OK with losing head-tracking. But then, why not just get traditional FPV glasses?

The fact of the matter is that the DJI Goggles are really in a product category of one at the moment. If you’re a DJI person they are a no-brainer, the rest might want to wait until something else comes along.