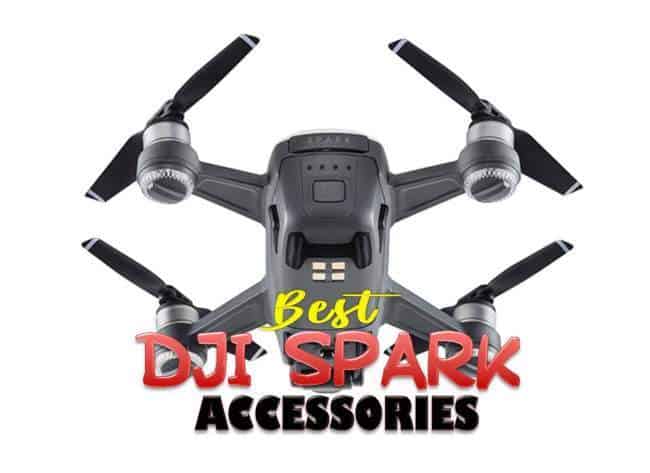 The DJI Spark has proven to be a massive success for DJI and also the drone which most clearly signals this technology is now mainstream. Drones are no longer just high-tech toys for geeky weirdos like us. No, now it’s as normal to whip out a selfie drone as it is to take out a smartphone.

That being said, you can get a lot more out if your new Spark drone by opening up your wallet and buying some awesome accessories for the little guy.

These are  the Best DJI Spark Accessories we have found right now. 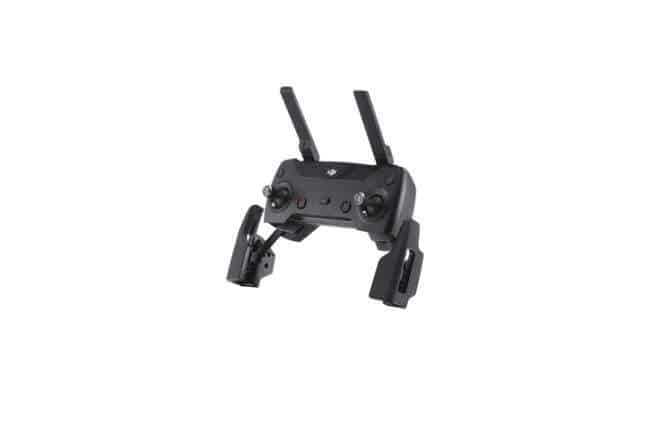 This first one is really an obvious one, but that’s because it’s so important. Unlike other drones from DJI, the Spark doesn’t come with a remote controller that allows for stick-based manual flight. It makes sense, since it’s aimed at people who want an autonomous system and don’t care much for precision manual flight.

Pairing your Spark with the DJI controller brings a lot of things to the table though. Range is extended significantly and now you can get those shots and clips that are simply too complex for the Spark to do by itself. It’s also a great way to step up to more serious machines such as the Inspire or Phantom.

Controller or not,  the Spark relies on your smartphone screen to act as the FPV and app interface.  Unfortunately just about every smartphone screen, no matter how expensive, is absolutely unreadable in sunlight. While you can shade the screen with your hands if you are only using a smartphone to control it, those who opt for a full controller will benefit from getting a sunshade accessory. You know, since most of our flying happens in a place commonly known as “outside”. 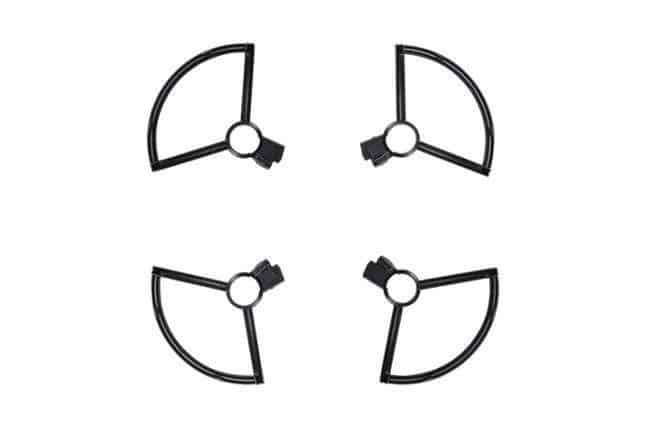 The Spark is pretty decent at not flying into things that are in its way, but unlike some of the higher-end models in the DJI lineup it doesn’t have full spatial awareness.  A set of prop guards are an affordable way to prevent crashes when you Spark inadvertently backs into a wall.  They are so light it has no real effect on your flight times and can save a lot of grief, not to mention money spent on new props. 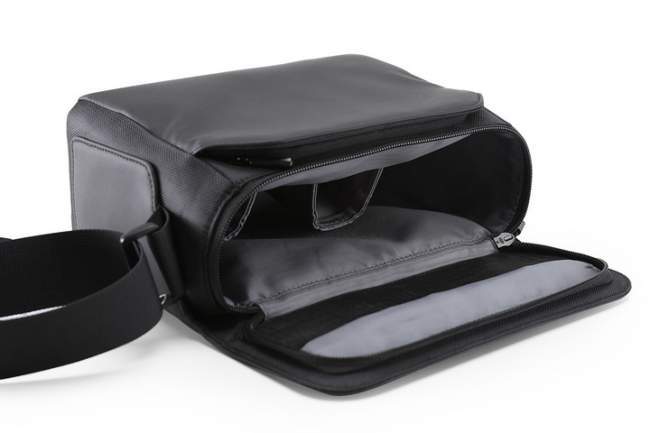 While the Spark is an incredibly compact drone, it lacks any sort of folding feature. Unlike the Mavic Air and Pro models. This means that it’s actually not such a good idea to chuck it in a bag with no concerns. Luckily you can get a shoulder bag with a foam mould which will keep the drone as well as several other accessories snug and safe. 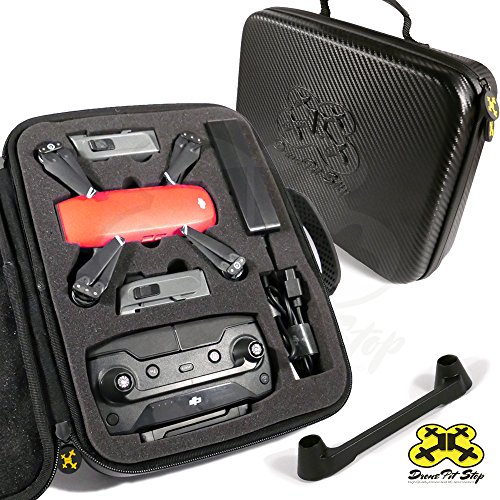 While the Spark isn’t really meant to be any sort of replacement for extreme sports drones or professional drones one would use in extra-urban conditions. Still, the Spark has such a good camera and flight performance that it’s understandable if you want to lug it to places that are a little inhospitable. If that sounds like something you’d like to do, maybe consider getting a ruggedized carry case for your drone and all its accessories. That way you can take it wherever you want, albeit in a much bulkier form.

The FAA recommends that pilots wear a quality pair of sunglasses in the cockpit for safety and comfort. However, pilots of radio-controlled planes and helicopters have also sworn by them for years.  When you’re trying to see where your drone is against a bright sky sunglasses are essential.  Also, you’ll look very cool.

DJI sells a charging hub that will charge multiple intelligent flight batteries without you having to change them out manually. It really is the best solution when you’ve decided to buy multiple batteries and need to keep them juiced up before heading out, but you might want to check out the Spark’s unique portable charging station before putting down money on the hub. 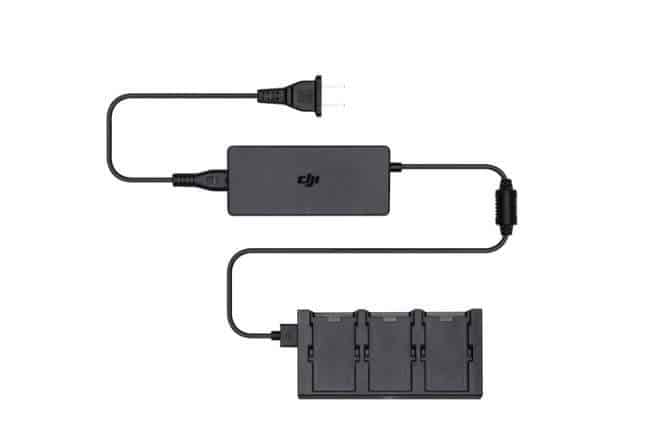 The DJI Spark Portable charging station is a unique official product aimed at owners of their littlest drone. In essence, it’s actually a custom power bank, but comes with some really neat features.

It has a  total capacity of 5000 mAh , which is pretty low compared to most power banks.  Still, that’s enough to charge three Spark batteries in 2.5 hours. Charging is wireless, which is inefficient, but pretty awesome. You can also connect the whole thing to mains power and since it charges the battery in the Spark plus two more, it basically makes having the charging hub I talked about above less essential.If you own other DJI drones with compatible batteries, the hub makes more sense, but Spark-only customers will want to look here first.

It’s not only a charging station, but a place where you can store your Spark safely. The Spark slots into a recess and a little cover can be secured over it to make sure it doesn’t fall out.

You can also use the station to charge up smartphones and other USB-powered devices.

The Spark was never designed for landing on rough surfaces.  It’s meant to land on smooth, flat terrain. Does that mean you have to abandon the idea of filming in the sticks? Not at all! Some enterprising third-party accessory makers have created extended landing gear that will allow the Spark to land in placed that would usually foul the props or the drone itself. Yes, this adds some weight to the drone, but they make it from such light materials that it shouldn’t make much of a difference. Plus, it’s not like you have to leave them on. 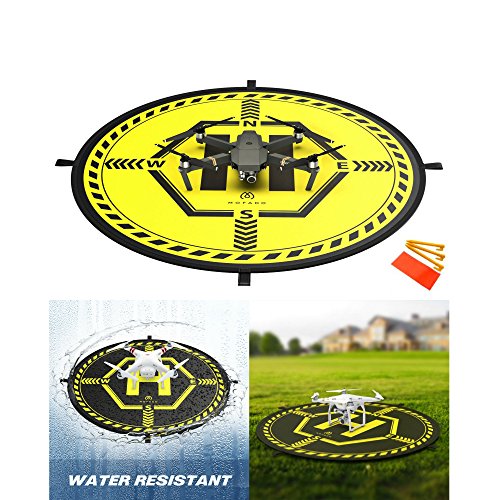 If you don’t like the idea of attaching plastic landing gear extenders to your little Spark, the alternative is to get a portable landing pad. Small drone landing pads can be placed on grass, sand muddy ground and other hazardous surfaces. This means your Spark can have a safe, clean and dry place to land. Think of it as your own personal helipad.

Models that provide some way to anchor the pad are a good idea. Especially if it’s a bit windy.

Ever wonder how it is that other drone photographers seems to get such amazing colours in their shots? Obviously a lot of skill (and Photoshop!) goes into making a drone photo look professional, but one of the most common methods is to use a neutral density lens filter. They’re meant for days when there are clear skies and no clouds to filter daylight into something a little less washed-out and harsh.

So if you want to take some of those photos and videos with vibrant color and great contrast, invest in a few of these little filter caps for the Spark.

Like ND filters, polarizing filters have a particular job when it comes to photography. In this case they are useful  for filtering out glare and reflections from water and other reflective surfaces.  So if you’re filming yourself surfing you’ll want some of these. 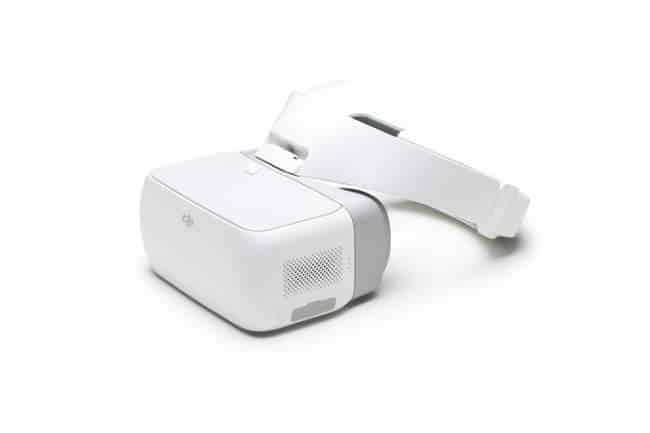 DJI Goggles are the official DJI FPV solution. I wrote about the amazing amount of technology stuffed into this head-mounted display not too long ago. Sure, can cost more than the actual Spark drone, but nothing transforms the experience of drone flight like a first-person display unit. Even better, most new DJI drones are compatible with the Goggles, so your next purchase should work with it too.

Apart from having a really good display built in to the unit, the  Goggles also feature independent head-tracking for the gimbal.  This means you can pilot and operate the camera independently with ease. 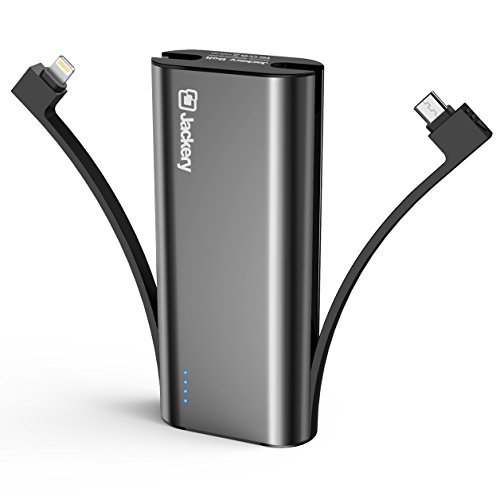 The Spark stands out from other DJI drones thanks to the fact that it can be recharged via USB. This opens up the possibility of recharging your Spark using a power bank. It’s not as fast as charging from the wall obviously, but if you’re far from a mains electricity connection and don’t have spare batteries this is the only remaining option.

The main reason you’d go with a generic power bank over the official portable charging station is if you only have one flight battery and have things to charge other than just your drone.

After going through that long list of accessories for the DJI Spark you might need a second person to cart all the stuff around just for your teeny drone.

Hey, I can’t stop you from buying all of this neat gear, but the idea is to make your life easier, not harder. So decide what it is you want your Spark to do for you and then choose the accessories that fit its mission. Godspeed you budget-conscious heroes!