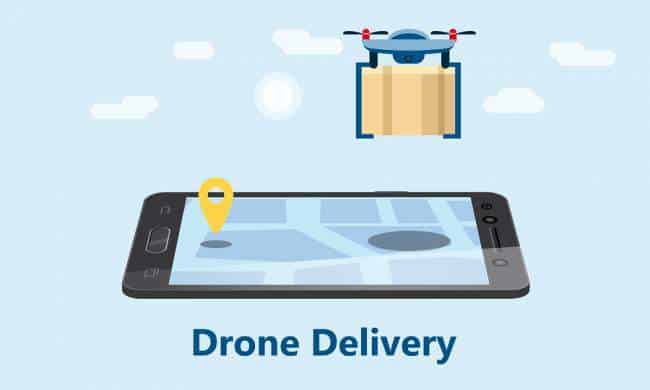 We’ve seen a number of impressive demos and drones of various designs. Amazon has been busy putting infrastructure in place to make drone deliveries a reality. Now the company says that mainstream drone deliveries are “months” away and have shown us the next generation Amazon delivery drone at the same time. It’s an impressive machine and one worth taking a closer look at.

Yes, I know I’m laying on the Transformers puns pretty thick, but how often do we get to see a real transforming robot. Sure, this is hardly a Beetle turning into a towering death machine, but Amazon has still shown us something very cool indeed.

It’s a full electric drone with a range large enough top fly fifteen miles and then deliver a package from five pounds and down. That’s a pretty impressive set of capabilities, but the most impressive things about this machine is that it can convert itself from an efficient VTOL craft to a plane with great gliding characteristics. If it wasn’t for that, you’d never get this sort of range from an electric drone and would have to resort to something much less eco-friendly.

The wings of this drone are also safety shrouds. So Amazon has addressed on of the issues with mass urban drone usage, while actually adding something that helps the drone fly. Having components pull double duty like this is key to making an efficient and cost-effective aircraft, so kudos to the eggheads at Amazon.

Flight of the Bumblebee

I swear, that’s the last Transformers reference, seriously. So one very interesting thing about this drone is that it doesn’t just fly according to the standard four degrees of freedom we are all used to. Instead it moves freely in 3D space with six degrees of freedom. If you are into VR, you’ll know that term refers to the gold standard of movement within a 3D space. Thanks to this more refined movement capability, the drone can achieve a level of stability in flight that’s unheard of. Especially in adverse weather conditions. Have a look at this weird machine in flight.

It’s a little reminiscent of a Tie Fighter from Star Wars. isn’t it? It’s clearly a very capable craft, but it’s about more than just it’s flight capabilities. Amazon also make some pretty impressive claims about its autonomous safety features. This drone can independently react to unexpected conditions and make decisions for safe outcomes.

While it’s en route to the delivery destination or on its way back to base, it can identify and track objects that are fixed or in motion. From any direction! To this end the drone is packed with a variety of sensors and lots of Amazon secret sauce algorithms.

Coming in for a landing is also much more advanced than before. In previous videos we saw customers placing a special pad in a safe spot, which is where the drone will land. It’s not clear if this new drone still needs that, but it can use it’s 3D cameras and software to identify people or animals in the landing zone and ensure they don’t become victims of an accident. This drone can even detect and avoid things like phone lines, electrical wires and clothes lines. A problem that’s been rather tough to crack.

Time will tell if something like this new drone prototype is really going on duty within less than a year, but based on what we’ve seen so far the level of appropriate skepticism is falling rapidly. Totally unlike we’re sure these drones will be.